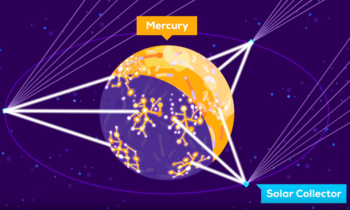 Mercury is the closest planet to the Sun and the smallest of the four inner terrestrial planets. With its lack of an atmosphere, scorching heat on the day side, freezing cold on the night side, and a rotation period that lasts 59 Earth days, surely this sun-baked cratered rock doesn't have much to offer when compared to Mars or even Venus, right?

As it turns out, Mercury is the second-densest planet in the Solar System after the Earth, meaning it's very metal rich and a prime candidate for future mining operations; conversely, given its proximity to the Sun, Terraforming Mercury is usually out of the question because of its hostile conditions — all of which gives space pioneers a legitimate excuse to exploit the planet for its raw resources alone. For this reason, science fiction writers have often used Mercury as a hub for mining and industrialization to meet the needs of humanity's expansion across the system.

Note: Mercury was formerly believed to be tidally-locked to the Sun, with a day side in permanent light and a night side in eternal darkness. This has now been disproved, but a lot of older stories using the Industrialized Mercury trope refer to it; see below for examples.

Expect to see a lot of mining outposts, factories, and power plants that take full advantage of solar energy on the surface, and mining may be controlled from a Mercurial Base to avoid the extreme heat. Operations will usually be run by a local Mega-Corp that often forms its own government separate from Earth's, which may be autocratic by nature depending on how corrupt the leaders are. Additionally, Mercury may be used as a base of operations for constructing and maintaining a Dyson Sphere around the Sun.

If taken to the logical extreme, the planet may be entirely disassembled to its very core for its resources, which may result in Mercury becoming an empty shell of its former self or ceasing to exist. The ethics of such environmental destruction are rarely questioned due to Mercury being too extreme of a place to set up permanent colonies, and as such, is often given lower priority for preservation than the other terrestrial planets. (It’s just a big rock.) If preservation is considered, it's usually for the opportunity to seize solar energy production rather than out of any need to keep the planet as it is, let alone terraform it.

While primarily talking about Mercury itself, this trope can also extend to include Mercury-like exoplanets of similar properties (fictional or otherwise), since most star systems generally follow the same rule of having the densest, metal-rich planets form and orbit close to their stars (Hot Jupiters notwithstanding).

Sub-trope of Colonized Solar System. See also Venus Is Wet and Once-Green Mars for classic sci-fi portrayals of Venus and Mars respectively, and Pluto Is Expendable for when Pluto gets the short end of the stick for being demoted to dwarf planet status. Compare Asteroid Miners. Subtrope of Industrial World.

Nothing to do with industrial use of the element mercury. Or the Roman god Mercury using modern technology.