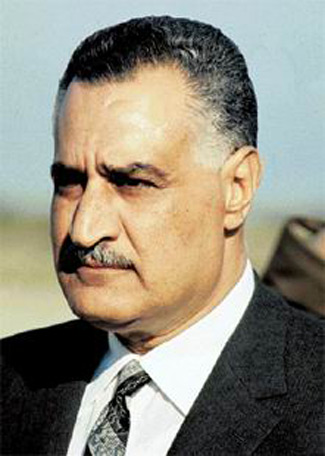 Gamal Abdel Nasser (15 January 1918 – 28 September 1970) was the second president of Egypt from 1956 through 1970. As a colonel in the Egyptian Army, Nasser led the Egyptian Revolution in 1952, along with Muhammed Naguib (the first President), and overthrew the monarchy of Egypt and Sudan. The revolution led to the abolishing of the constitutional monarchy and aristocracy of Egypt, the establishment of a republic, the end of British occupation and the independence of Sudan.

He gained the reputation of being the "Leader of the Arabs" due to his leadership in the Suez Crisis, the nationalization of the Suez Canal Company and the creation of the Non-Aligned Movement (alongside Jawaharlal Nehru, Kwame Nkrumah, and Josip Broz Tito). The Six-Day War and the War of Attrition damaged some of that image there, but he's still seen as a symbol of Arabic dignity and freedom and an Egyptian national hero.