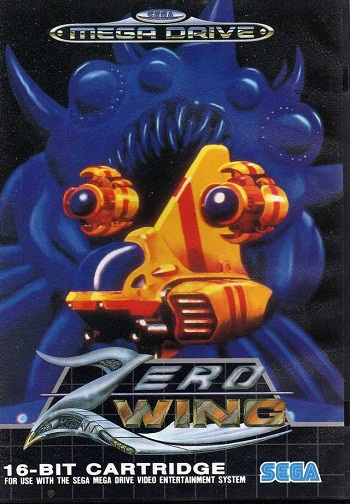 Zero Wing was a mildly successful Shoot 'em Up video game developed in 1989 by Toaplan. Compared to the rest of the genre, it is fairly simple and mundane; there is nothing in particular that makes it the least bit memorable...with the exception of the Translation Train Wreck that is its opening cutscene

Narrator: In A.D. 2101 War Was Beginning.
Captain: What Happen?
Mechanic: Somebody Set Up Us the Bomb.
Operator: We get signal.
Captain: What!
Operator: Main screen turn on.
Captain: It's You!!
Cats: How are you gentlemen!!
Cats: All Your Base Are Belong to Us.
Cats: You are on the way to destruction.
Captain: What you say!!
Cats: You Have No Chance to Survive make your time.
Cats: Ha ha ha ha....
Operator: Captain!
Captain: Take Off Every 'ZIG'!!
Captain: You know what you doing.
Captain: Move 'ZIG'.
Captain: For Great Justice.
Advertisement:

In case you need context: At the verge of the 21st and 22nd centuries, the Galactic Federation has its eyes set on taking over the Andromeda Galaxy, and recruits the Space Pirates Cats for assistance. The conquest goes as planned...until the Federation discovers the hard way that letting amoral space pirates do the work with Andromedan technology wasn't a brilliant idea. Cats backstabbed the Federation by taking over their bases, and detonated explosives on one of the Federation's major military vessels.

Said vessel is the ship that had just launched all its ZIG units—including yours. With your base ship destroyed, and armed only with a Tractor Beam and whatever weapons the ZIG can pick up on the field, you must take the fight to Cats and punish them for their treachery.

The poor translations gave way to Memetic Mutation due to how funny they are, most notably "All Your Base Are Belong To Us" quote, which was supposed to mean "All of your bases are now under our control." Some instances of Intentional Engrish for Funny will follow the form used in this game.

On this wiki, Zero Wing is also notable for being the Trope Namer for five separate tropes.note The ones that are in bold in the above Translation Train Wreck excerpt; it used to be six, before "Take Off Every Zig" was renamed to Fighter-Launching Sequence.

Not to be confused with the Wing Zero or Giga Wing.

The Sega Genesis version was made available on the Nintendo Switch Online Expansion Pack's Sega Genesis library on June 30 / July 1, 2022 (depending on region). The North American version of the app features the European version. A Steam port

will be released some time later, with the description making good note of the game's infamous status.