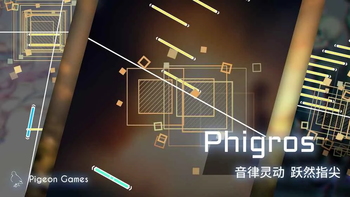 Phigros is a Rhythm Game developed by the China-based development team Pigeon Games for iOS, as well as Android via TapTap (and formerly on Google Play Store as well). It was released in 2019. Notably, the game is completely free of charge (no in-app purchases and not even any advertisements) and the songs are properly licensednote In fact, some of the song licensing contracts, such as that for "Aleph-0", mandate that the game remain a not-for-profit project, something extremely rare for a rhythm game. That said, the developers do accept donations

Described as a "laneless" rhythm game, the game features notes falling down onto a white judgment line, and the notes have to be touched as they reach the line. The game's key gimmick is that the judgment line may move, rotate, multiply, jump all over the screen, or otherwise toy with the very concept of judgment lines in rhythm games.

Compare VOEZ, in which the lanes may widen, narrow, and move across the screen, Dynamix, in which notes approach either from the top or the sides, and Lanota, in which notes emerge from the center of the circular playfield as the playfield moves around.