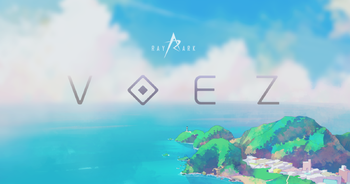 VOEZ is a Free-to-Play Rhythm Game for Android, iOS, and the Nintendo Switch developed by Rayark, the same developer behind Cytus and Deemo. Notes fall down different tracks and must be tapped when they reach the bottom, or a button pressed if playing the Switch version on a controller. However, the tracks the notes fall down can move, and change color and thickness, adding a visual element to the game.

VOEZ has a selection of eight or more free songs, which rotate on a regular basis. Keys can be purchased in order to unlock a song, so that it can be played when it is not currently in roation.

In addition to the songs, the game also includes diary pages, which detail the events of a group of friends and their lives. Diary pages are unlocked by completing different goals, and occasionally provide free keys for unlocking songs.

The Switch port in particular was previously known for being the only Switch game to be non-playable in docked mode, but a later update allows the game to be played in docked mode and with a controller (when the Switch is in handheld mode, it can be played with either type of input, but docked leaves controller play as the only option).