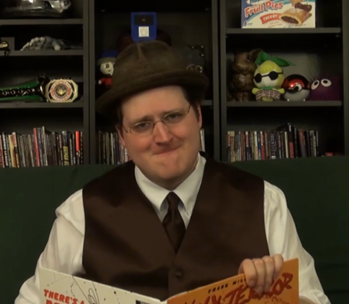 "Hello, and welcome to Atop the Fourth Wall, where bad comics burn, good comics are praised, and ignorance and hatred are unwelcome."
— Linkara
Advertisement:

Meet Lewis Lovhaug's snarky alter ego, Linkara: an "eccentric" comic book fan who wears a Nice Hat and reviews horrible comics. He started out writing text reviews of various comics on his blog Atop the Fourth Wall. However, when doing a three-part review on Smoke and Mirrors, one of the low points of The Clone Saga, he decided to finish off with a video review as an experiment. This new format turned out to be popular with his readers (and easier on him), so he continued to make videos. Eventually, he ended up joining Channel Awesome and has had many cameos in, and several crossovers with, a few of That Guy With The Glasses characters and their series. Lovhaug is also a major Mystery Science Theater 3000 (and by extension, Rifftrax) fan and will often make numerous references to the show, either in clips, quotes, or general joke style.

Example of:
This Is Reality