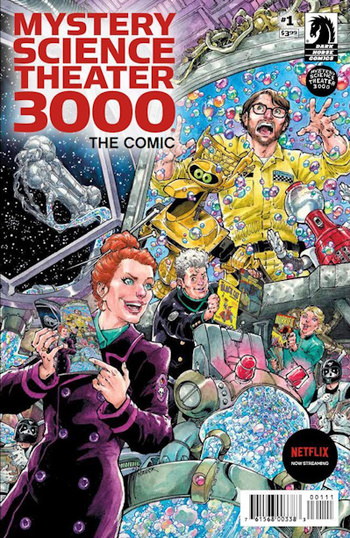 30 years after its TV debut, Mystery Science Theater 3000 finally made to the funny papers via a six-issue Mini Series published by Dark Horse Comics starting in 2018. It features the characters from the revival adapting to the comic book medium by creating a new way to riff. It's written by several of the producers of Netflix-era MST3K, including Joel Hodgson himself.

On Moon 13, Kinga Forrester introduces Jonah Heston and the bots to Synthia's new invention the Bubbulat-R, a machine that surrounds its subjects with bubbles, which somehow transports them into a comic book. Anyone inside a "bubbulated" comic becomes part of the story, sometimes to the point that they replace the main character; they also get word balloons that have little bubbles on them to show their dialogue isn't part of the original comic. Armed with "Max's dorky comic book collection", Kinga briefly uses Max himself as a test subject, then sends the Satellite of Love crew into several different books, where they snark away from whatever story world they find themselves in.

The book has several main artists; Todd Nauck draws the host segments, while the MST3K cast are inserted into the old comics by Mike Manley (issue #1 and #3, for the Johnny Jason stories) and Jack Pollock (issues #2 and #3, for the Black Cat and Horrific stories). So if you ever wanted to see Tom Servo's head on a human body, this is the book for you.

"Prepare to enter the nightmare-fueled world of tropes!"