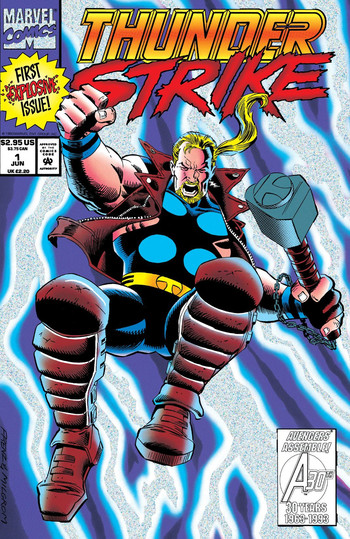 Thunderstrike is a spinoff of The Mighty Thor, about the adventures of Eric Masterson, who previously spent time taking over for Thor, and then as Thor, before being made his own superhero by Odin, who gave Eric his own mystic lightning weapon, Thunderstrike.

As Eric tries to become a superhero in his own right, he not only has to deal with thugs, superpowered criminals, and godlike evils, but also deal with his family life, as his ex wife, Marcy, has remarried and his son, Kevin, is torn between two sets of parents.

The series debuted in 1993, but was cancelled after 24 issues. There was a miniseries revival in 2010.

This is about the comic series. Tropes for Eric Masterson himself are listed here.