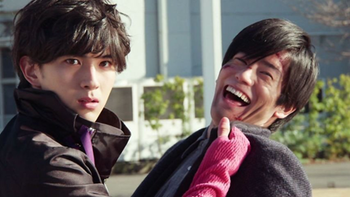 Emu, as the Game Master, I've reserved an extra special punishment for you!

The Episode starts ominously on the rooftop of the hospital. Emu confronts Hiiro on the rooftop, bluntly asking if Hiiro's been hiding anything from him.

As Hiiro struggles to answer, we find Tsukuru mourning the loss of Burgermon, the last words of his dying friend etched into his mind: "Make games full of dreams." As he mourns, Kuroto Dan finds him and explains that he finds it unique that he too could create a Gashat. Tsukuru says that the Doctors have brought him up to speed on Kuroto's deeds and wonders what he's thinking. In retaliation for the comment, Kuroto Dan takes his Gashacon Bugvisor and fires data at Tsukuru, infecting him with the Bugster Virus. He then insults the man, claiming that nothing he ever made could become a smash hit. Back on the rooftop, Emu grills Hiiro some more, anxious to find out why he can transform without a surgery, among other things. Hiiro continues to avoid the topic and instead asks for Emu's Gashats. Their detectors then go off, causing Emu to run away angry. As the man leaves, Hiiro laments his inability to operate on Emu.

Emu and Poppy find Tsukuru and Kuroto Dan, who reveals that he was the one that reported Tsukuru's infecton; wanting bait to lure Emu (and Taiga, who has also arrvived) to him. The Riders all transform and begin fighting. The battle doesn't last long, as Zombie Gamer is quickly outmatched by the combined force of Snipe Full Dragon and Mighty Brothers XX. In response, Kuroto insults Tsukuru even further, stressing him out enough to release the Motos Bugster; who immediately flees the battle with Ex-Aid in pursuit. Ex-Aid re-assumes MMXX Level 10 and uses a nearby Speedify power-up to keep up with him. Genm meanwhile ends up defeating Snipe effortlessly without Ex-Aid as back-up, which was the plan. As he leaves amid protests from Nico, he seizes Taiga's Gashats. Ex-Aid loeses the Motos Bugster and decides to return to Taiga, whom he realizes far too late has lost the battle. He de-transforms, discouraged; only to end up overtaken by another virus-related headache.

Later, Emu has taken Tsukuru back to CR. At CR, Tsukuru explains that Genm Corp. now has a new President, who has started an in-company competition in an effort to boost morale. Tsukuru was initially reluctant to enter, but was soon goaded by his co-workers. Kuroto's mockery was causing him stress, which allowed Motos to be released. Emu tells Tsukuru that he intends to beat the Bugster and cure Tsukuru. In the other room, Hiiro continues to lament his situation, (as well as Taiga's) only for he and Poppy to be given a discreet call by Taiga. Taiga explains that Emu's body has reached its limit. "Do not let Ex-Aid meet Genm." This ominous warning is followed by an interruption from Nico that ends the call. Poppy then begins to realize that Hiiro was hiding something and learns of Emu's condition. Poppy wants to tell Emu, but Hiiro reminds her that as a doctor, finding out he's infected with the Virus would stress him out.

At Kuroto's lair, it is discovered that he's completed yet another Gashat; an update of Taddle Quest and Bang Bang Shooting. Parado's enthusiasm has faded as he eyes his "partner" with disgust and cold analysis. Kuroto explains that once he has all the Bugster data he needs, Kamen Rider Chronicle will be completed. He tells Parado what KR Chronicle is: A game in which civilians transform into Riders and fight for survival. Parado tells Kuroto that he is the only one that will beat M, even pulling Kuroto up by his shirt when he doesn't cave. Kuroto aggressively tells Parado not to talk back to "the game master;" as the Bugsters are simply tools to make his ambition reality. As he has create characters that act as he wishes them to, Kuroto sees himself as a god now. He then begins cackling madly, as the last of his sanity has seemingly left him.

At Genm Corp., the Motos Bugster is seen harassing Tsukuru's co-workers, which elevates his stress to dangerous levels. At CR, their Bugster detectors go off yet again, causing Emu to attempt to leave and operate. Hiiro bars his way, asking yet again for his Gashats. Emu insists on knowing what Hiiro is hiding from him, but all he can say is that he "wants to cure the patient in front of his eyes." This only makes Emu angrier and he rushes out the door. Outdoors, the Motos Bugster is intercepted by Ex-Aid, in Shakariki Sports Level 3 form. Kuroto Dan arrives, congratulating the Motos Bugster on it's decoy role. Parado watches sullenly from afar, as the Bugster makes its offense obvious. Hiro, Asuna, Taiga, and Nico all make their way on-scene. Nico attempts to intimidate Kuroto, only to receive an utterly deranged smile in return. Ex-Aid activates Stage Select, while Kuroto takes out the new Gashat. He turns it and explains that the Taddle Quest update "Taddle Fantasy" is a game in which you play as a villain that must defeat encroaching heroes. Too bad for Emu and Co., it's also Level 50. Ex-Aid transforms into Mighty Brothers X, but is defeated in one attack by the Taddle Fantasy robotic helper. Once Emu is on the ground, the Motos Bugster re-appears, berating Kuroto for calling it a decoy. Instead of an explanation, Kuroto transforms into Zombie Gamer and brutally destroys the Bugster with a Critical End, absorbing its data. Tsukuru is also cured in the process Genm then rants once more, explaining that the Bugsters and Riders are his pawns and that those no longer useful need to be disposed of. He then stands towering above Emu, again demanding Emu's Gashats; even placing the Sparrow near Emu's throat as a warning. Emu refuses. As Genm sighs bitterly, he is immediately attacked from behind!

It's Kamen Rider Para-DX, who reveals that he's had enough of Kuroto's scheming, asking what what exectly he thinks the Bugsters are. Genm reminds Para-DX that he was the one that destroyed Revol. Para-DX replies with the fact that the Bugsters operate solely in the spirit of rule-based competition. Genm calls Para-DX out on "defying the game master" and attacks. However, Zombie Gamer is no match for Knockout Fighter's raw strength and is thrashed into the nearby cliffside in a display of raw power. Para-DX then switches to Perfect Puzzle and defeats Genm with a Muscle-amplified Critical Combo. This knocks Kuroto out of the Zombie Gamer transformation and does away with the Stage Select.

Kuroto breathes roughly, before gaining a cruel smile on his face. He asks Parado about his wish to fight Emu.....and immediately plans on punishing him. Kuroto then turns to Emu, and asks if he wants to know the details of why he didn't need the compatibility surgery and why he can transform. Hiiro, Taiga, and Parado all rush at Kuroto in an effort to silence him....but it's too late. He tells Emu simply.....

He is Patient Zero of the Bugster Virus and his disease is manifesting.

Emu begins breathing erratically, denying that it could possibly be true. Wasn't Kuroto just tricking him? His stress levels rise as his thoughts flicker back to his previous attacks. His eyes turn blood-red and his body glitches out as it becomes surrounded by data.

The Episode ends with an insane cackle....and a mournful scream.