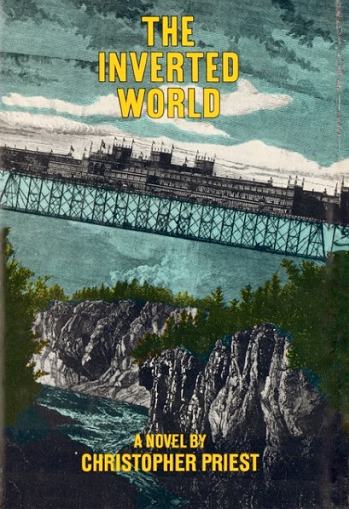 "I had reached the age of six hundred and fifty miles."
— Opening line
Advertisement:

The Inverted World (also published as just Inverted World) is a science fiction novel by Christopher Priest, taking its concept (but none of its plot or characters) from a short story of the same name. Originally published in 1974, it was republished in 2010 as part of the SF Masterworks Collection. The Inverted World won an award from the British Science Fiction Association and was nominated for a Hugo.

Helward Mann is a citizen of the City of Earth, a massive rail-mounted structure which has somehow become Trapped in Another World. Upon coming of age, Helward joins the Future Guild, allowing him to explore the world outside the City for the first time. The story follows Helward as he tries to understand the nature of the strange inverted world in which he finds himself, and learns why the people of the City must forever struggle to keep moving it endlessly forward.