Film / In The Tall Grass 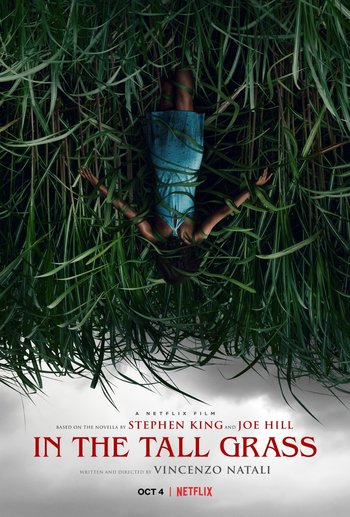 In the Tall Grass is a 2019 Canadian supernatural horror film and an adaptation of the novella of the same name by Stephen King and Joe Hill. The film was written and directed by Vincenzo Natali and premiered at Fantastic Fest on September 20th, 2019 before enjoying a wider release on Netflix on October 4th.

Siblings Becky and Cal Demuth are two days into their drive to San Diego, with Becky six months pregnant. While stopping outside an old church, the pair hear a young boy shout for help from a nearby field of tall grass. They enter in an attempt to rescue the child, but as they venture deeper into the field, they begin to realize that something doesn't want them to leave...

The film stars Laysla De Oliveira as Becky, Avery Whitted as Cal, Will Buie Jr. as Tobin, Patrick Wilson as Ross, Harrison Gilbertson as Travis, and Rachel Wilson as Natalie.

The novella contains examples of: