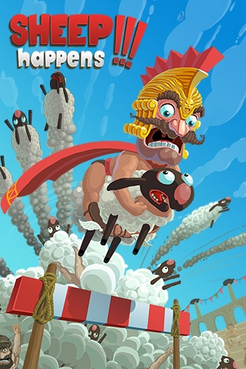 Sheep Happens is an endless runner iOS game about Perseus, Hermes, and lots and lots of sheep.

Perseus was about to partake in a race at the Olympics when Hermes flies over and offers him some magic sandals. Wanting the edge, Perseus gladly buys them, but doesn't see that Hermes' fingers are crossed. When he runs past the finish line, Persus realizes the sandals are cursed and he can't stop running. Wanting revenge, he chases down Hermes; running through hurdles, other runners, sheep, and more obstacles just to punch the cheating god in the face.