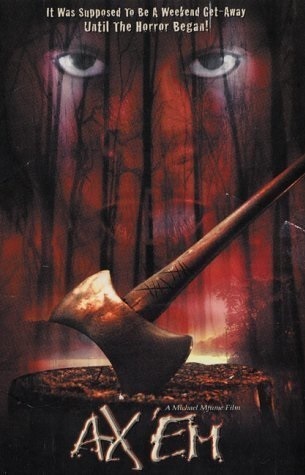 "On a cold winter night, in 1990, Mr. Mason, a mean and cruel Towns man, left his job for Home. After arriving home, He took a shotgun And killed his wife and Kids. Then is mean man Killed himself.
When the police arrived they only Found the bodies of his wife, Daughter, and younger son. His mentally Ill son Harry Was not ever found.

Legend has it, he will return in 13 years to revenge his family deaths."
— The opening scroll
Advertisement:

Ax 'Em (originally titled The Weekend It Lives) is a horror film directed, written and produced by Michael Mfume, made in the '90s and distributed in 2002.

The film follows a group of teenagers who attend Morgan State University, and make plans to head up north for a party at an isolated cabin. Unbeknownst to them, the mentally-ill son of a man who executed himself and most of his family has been wandering the woods looking for revenge, and soon comes to massacre the teenagers. What follows is a race as the teens try to survive and look for a way out before Harry kills them all.

The film was the first (and only) film produced and directed by Mfume, the son of former senator (and president of the NAACP) Kwesei Mfume. It was heavily panned during its initial release, and languished in obscurity for years until its release on DVD a decade later.