Film / Gold Is Where You Find It 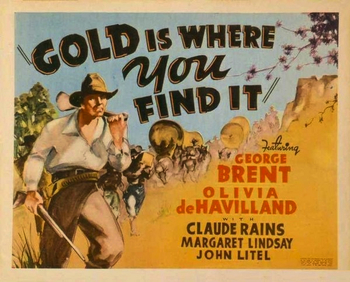 Gold Is Where You Find It is a 1938 film directed by Michael Curtiz.

The setting is California's Sacramento Valley in the late 1870s. The Sacramento Valley has become a highly productive agricultural area, with farmers like Chris Ferris (Claude Rains) growing wheat that feeds the world. His daughter Serena (Olivia de Havilland), given 50 acres on the Ferris estate, has started an apple orchard and believes in the potential of California as a fruit-growing area, but no one pays much attention to a 17-year-old girl.

Ferris and the other farmers of the Sacramento Valley are facing an immediate threat. Thirty years after the original gold rush, miners are still digging gold in California, but the easy gold deposits in the streams have been picked clean. The Mother Lode

still contains gold, but in the bedrock of the Sierra Nevada mountains, requiring more labor-intensive mining techniques. Gold mining has become industrialized, with miners using high-pressure water cannons to break up the rocks in the hillsides so they can get at the gold. This results in flooding and mudslides that are destroying the crops of Ferris and the other farmers.

Jared Whitney, an engineer from the east (George Brent), has arrived in California to supervise operations at the Golden Moon Mine. Jared and Serena fall in love, much to the displeasure of Chris, who regards Jared as one of the enemy. Chris and the other farmers have sued in court to bring the miners to heel, but the owners of the Golden Moon Mine regard themselves as above the law and will go to any lengths, including murder, to keep the mine in operation.

Only the second Warner Bros. feature film made in Technicolor, the first being 1937's God's Country and the Woman.