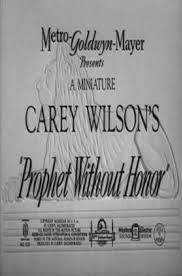 Prophet Without Honor is a 1939 short film (11 minutes) directed by Felix E. Feist.

It is a documentary about the life of Matthew Fontaine Maury, pioneering oceanographer. Maury joins the United States Navy as a young man, but his promising career as a fleet officer is ruined when a fall form a carriage leaves him with a lame leg. Unable to serve at sea, Maury takes a desk job. With time on his hands he begins studying old records and naval logbooks. Soon he realizes that wind currents at sea obey predictable patterns and that knowledge of these patterns can be crucial in navigation. His studies of wind, weather, and the ocean floor make him famous around the world. But his reputation is ruined when, at the outbreak of the American Civil War, he resigns his commission in the U.S. Navy to join the Confederacy.