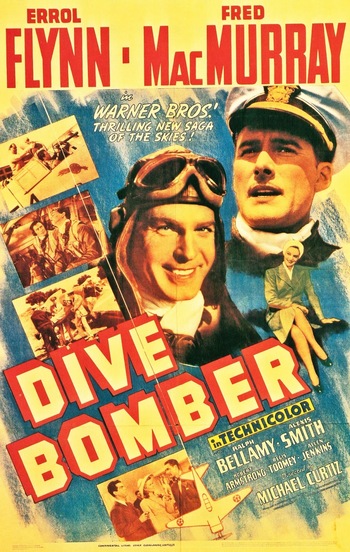 As Lt. Commander Joe Blake (MacMurray) and his squadron of US Navy dive bombers conduct maneuvers in Pearl Harbor, Hawaii (not yet bombed!), one of his pilots loses consciousness during the dive — a common problem for dive bombers, due to the excessive g-forces — and crashes. The pilot is whisked to the hospital but Navy surgeon Lt. Doug Lee (Flynn) is unable to save him, as he dies on the table before they can operate.

Blake takes a dislike to Lee for both his failure to save Blake's friend and his brusque manner in announcing the death. Lee, however, is more affected than he seems by this failure. He joins the naval pilot program and gets certified as a pilot and a flight surgeon. Along with his boss, Lt. Commander Lance Rogers (Bellamy), Lee throws himself into solving the problems of high altitude flight, including the g-forces problem that killed Blake's friend, and the low-pressure and lack-of-oxygen problems that are mortal threats to pilots at over 35,000 feet.

The 12th and last film collaboration of director Curtiz and star Flynn. Not quite a World War II film, as the United States didn't enter the war until over three months after its release, but a propaganda flick quite clearly made with eventual American entry into the war in mind.