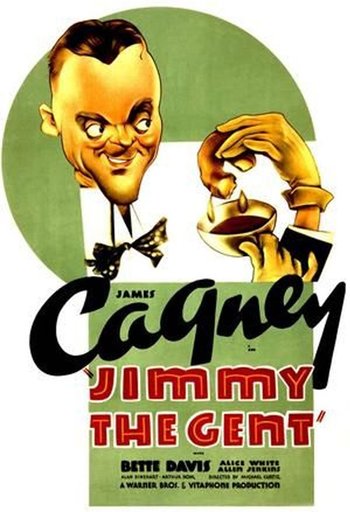 Jimmy the Gent is a 1934 comedy film directed by Michael Curtiz.

Apparently, there is an epidemic of rich people dying intestate, with no known heirs. Jimmy Corrigan (James Cagney) runs a pretty shady business that involves hooking up long-lost relatives with the money they're entitled to inherit from recently departed rich folks. Shady, because if Jimmy can't find a legitimate heir, he arranges for people to impersonate heirs, and then splits the money with the impostors.

His old girlfriend Joan (Bette Davis) has dumped Jimmy because of his sleazy ways, and taken up with Charles Wallingham, who runs a classier and (supposedly) far more ethical heir-hunting business. When a homeless old woman named Barton dies and is found to have $200,000 in jewels and securities on her person, Wallingham finds an heir named Sarah Barton. However, Jimmy discovers her uncle, Monty Barton, who would stand to inherit the whole fortune—except that he's wanted for murder. Will Jimmy be able to maneuver Monty Barton into inheriting the Barton fortune? Can he do that and win Joan's heart?

One of only two films that Cagney and Davis made together despite both being contract players at Warner Brothers for many years; the other is 1942 film The Bride Came C.O.D.