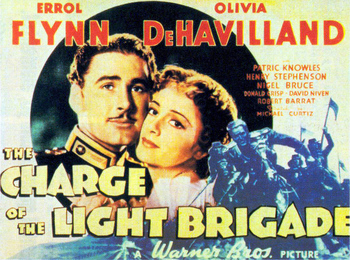 Believe it or not, she picks a different guy.
Advertisement:

The Charge of the Light Brigade is a 1936 film directed by Michael Curtiz.

It takes place in The Raj and in the Crimean Peninsula. Major Geoffrey Vickers (Errol Flynn) is a British cavalry officer. He returns after a long period of detached duty, eager to see his fiancee, Elsa (Olivia de Havilland). What Geoffrey doesn't know is that during the time he was away, Elsa has fallen in love with his younger brother, Perry (Patrick Knowles), also a cavalry officer. Elsa's father, Col. Campbell (Donald Crisp) is not at all thrilled to hear this news and punishes Perry by sending him to non-combat duty in the rear. The brothers become estranged.

Meanwhile, one Surat Khan, an Afghan warlord on the fringes of the Raj, has become disenchanted with the British Empire. He declares open war on the British, capturing a British fort and massacring the entire garrison and their civilian relatives/families. He spares only Geoffrey and Elsa because once, years ago, Geoffrey saved his life during a leopard hunt.

Transition to The Crimean War, with the British and French allied against the Russians, and the Russians allied with Surat Khan. At the Battle of Balaclava

Geoffrey, serving with the British light cavalry—the "Light Brigade"—discovers that Surat Khan is with the Russian enemy. He then arranges for the regiment to attack, bringing about the infamous "Charge of the Light Brigade

The charge of the Light Brigade as filmed in the movie involved the use of tripwires to trip the horses to make things look more dramatic. This caused the deaths of 25 horses and one stuntman. Nobody worried too much about the stuntman but 25 horses being killed outright or put down after filming caused a wave of popular outrage that led to the banning of tripwires, and was an important event leading to the No Animals Were Harmed disclaimers in movie credits.

Max Steiner composed the score. David Niven, then just getting started in Hollywood, has a supporting role as Captain Randall. No connection to 1968 film The Charge of the Light Brigade, which has nothing in common with this movie other than also having the charge as the climax.