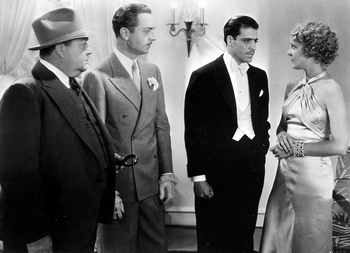 It is an adaptation of the Philo Vance novel of the same name. Archibald Coe is an obnoxious jerk who is basically asking to be murdered. His niece Hilda Lake (Astor) resents Coe for controlling her and for refusing to let her have her inheritance, which is in a trust. His brother Brisbane Coe just generally despises him. His secretary Raymond Wrede is in love with Hilda and hates Coe for refusing to saction the union. Another of Hilda's suitors, Sir Thomas MacDonald, hates Coe because he thinks Coe killed his dog—Coe's and Thomas's dogs were scheduled to compete against each other in a dog show, hence the title of the movie. Liang, Coe's Chinese cook, had helped Coe amass a priceless collection of Chinese antiquities and is outraged that Coe is going to sell the collection for a profit. Eduardo Grassi, who has contracted to buy the collection on behalf of the Italian government, is enraged when Coe renegs on the contract after finding out that Grassi is dating Coe's ex-lover, Doris.

Basically, everybody hates Archibald Coe and no one is sorry when he's dead. The cops call it suicide, as Coe was found in a locked room with a gun in his hand. But private detective Philo Vance isn't convinced; he was at the dog show and knows how much Coe wanted to win. Vance insists the cops look more closely, and sure enough it turns out Coe was murdered. It's left to Vance to sort through the tangled mass of suspects.

Last of five films where William Powell played Philo Vance. The next year he played a different detective, Nick Charles in The Thin Man.