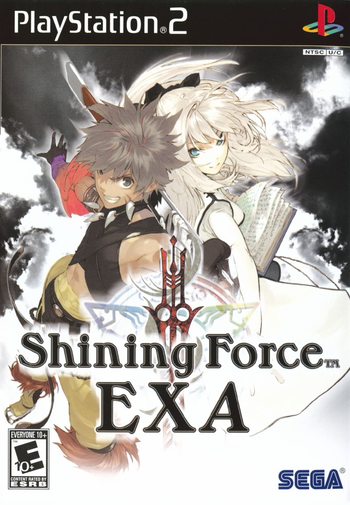 A 2007 iteration of the Shining Series for the PlayStation 2. It plays like an action RPG, with the player controlling one of two playable characters while the AI controls up to two companions.

The story follows the journey of two young people: the wild and straightforward Toma (who grew up amongst a tribe of nomads) and the sharp-tongued and well read Cyrille (who was raised by her grandfather, a famed historian who instilled her with a love of reading). They seek the legendary holy sword Shining Force, which was used by the hero Grant to defeat an ancient god of evil in the distant past. Legend states that the wielder of Shining Force would become King, but amidst rising tensions between the powerful Noswald Empire and its armies of War Beasts on one side and the Land of Fyrlandt (home of the demon-like Magnus) on the other, things aren't quite so simple...

The two main characters Toma and Cyrille, along with Reimsianne La Vaes and a number of her followers, appear in Project × Zone.