This is the character sheet concerning the main characters of Code Geass. 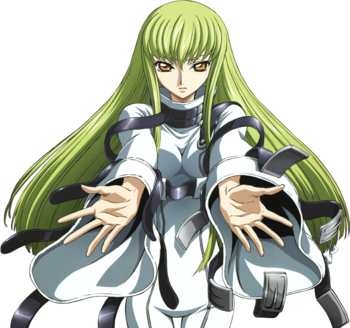 Voiced by: Yukana (Japanese), Kate Higgins (English)
"Snow is white because it's forgotten what color it's supposed to be."

A mysterious, snarky girl who makes a contract with Lelouch and grants him the power of Geass. In truth, C.C. is an immortal witch who has lived for centuries, and has an apparent connection to Lelouch's fallen mother Marianne. She knows a lot more than she lets on, often muses on the nature of humanity due to her long lived nature, and remains at Lelouch's side as he plans to obliterate Britannia and change the world's order. 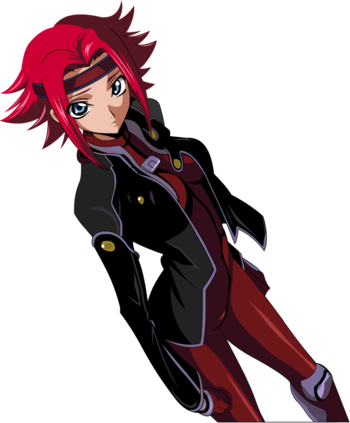 Voiced by: Ami Koshimizu (Japanese), Karen Strassman (English)
"If only you had justice on your side!"

Half-Britannian, half-Japanese, fully dedicated to liberating Japan from Britannia's rule of oppression, Kallen is an Ace Pilot and fights alongside with the Black Knights as Zero's personal bodyguard. Like Lelouch, she also struggles with living a double life as the sickly, soft spoken Britannian Kallen Stadtfeld, and the hot blooded Japanese freedom fighter Kallen Kouzuki. She also struggles with facing the different sides of Lelouch, valuing the ideals of Zero above all. She is the only pilot skilled enough to pilot the Guren, whose Radiant Wave Surger is able to completely melt opposing Knightmare Frames. 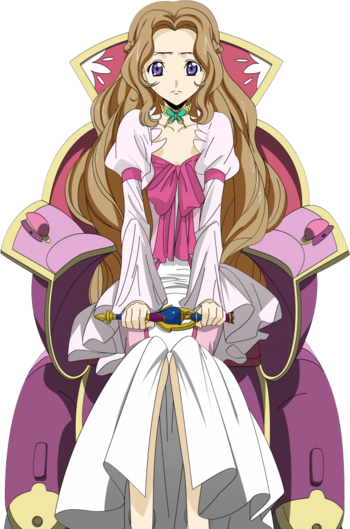 Voiced by: Kaori Nazuka (Japanese), Rebecca Forstadt (English)
"My wish is for a gentler world."

The daughter of Emperor Charles and his consort Marianne, as well as Lelouch's younger sister. The messy death of her mother left her not only contained in a wheelchair but also blind out of the trauma of having her mom bleeding all over her and dying. She's shown as a sweet, gentle girl who attends Ashford Academy's middle school and serves as Lelouch's Morality Chain. Lelouch is trying to overthrow the entire world's order for her sake, no matter the cost.

In Nightmare of Nunnally, she is the main protagonist, who receives a Geass that allows her to see the future and an alternate personality derived from her anger and other negative emotions that can move and pilot a Knightmare Frame. She initially sets out to find Lelouch, but also expands her goal to stopping the bloodshed between Britannians and the Japanese. 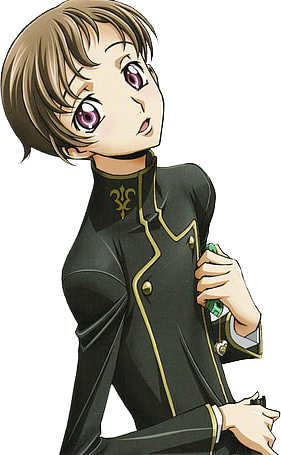 Voiced by: Takahiro Mizushima (Japanese), Spike Spencer (English)
"I can't remember how many people I've killed. Nobody counts the number of times they brush their teeth or eat a meal. Same with this."

A socially awkward student of Ashford Academy, he's introduced in R2 to serve as Lelouch's false younger brother after everyone was given Fake Memories at the hands of the Emperor's Geass. He was raised by the Geass Order to be a Tyke Bomb, and is actually an assassin that's tasked to kill Lelouch if he steps out of line. That is of course, until Lelouch manages to bring him into the throes of war as well.