The character sheet about the Chinese Federation characters of Code Geass. 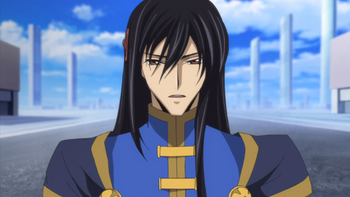 A minor officer within the Chinese Federal Military, Li Xingke swore his loyalty and life to the young Empress Tianzi after she saved him from being executed for showing mercy to a prisoner. Now he has dedicated his life to climbing the ladder of the Chinese Military to gain enough power to overthrow the de facto rulers of the Federation, the Eunuchs, and grant the Empress her greatest wish: to see the outside world. Considering the fact that he is said, and has mostly proven, to have both the strength of Suzaku and the intelligence of Lelouch, this is very likely. 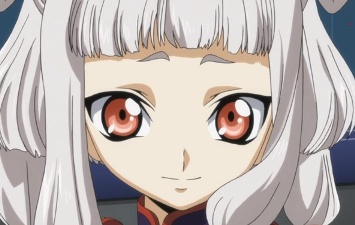 Voiced by: Tamaki Matsumoto (Japanese), Jessica Straus (English)
"Someday, I want to see the outside world."

The Empress of China, who appears in R2. Technically speaking, the Tianzi ("Child of Heaven") is supposed to be the leader of the Chinese Federation and the heir to the old imperial tradition. In reality, the current Tianzi is a teenage girl kept away from her people by her council, the Eunuchs, who rule the country as they wish. However, not everything is lost: Tianzi has a protector in Li Xingke, and even if she's powerless at the moment, she's touchingly determined to do what she can.

A circle of the Empress's advisers who run the country under her shadow. They seek personal gain even if it means betraying their whole country. In Chinese Federation arc of R2, they agree to lend the Black Knights land for the million Japanese exiles and recognize their state of the United States of Japan. However, they also collaborate with Schneizel to hand the Empress and their territory over in return for Britannian noble titles.