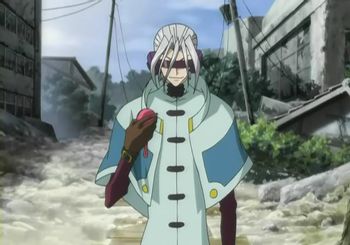 A Chinese orphan whom the immortal woman C.C. finds as a six-year-old boy and whom she "gifts" with the Geass power of telepathy. As happens with Geass, he loses control of it, forcing him to listen to everyone's thoughts constantly and involuntarily, without any possibility of blocking them — except by avoiding human contact altogether. Thus his telepathy has the tragic side effect of rendering him completely, permanently, and irrevocably dependent on C.C. for all of his social needs. For a time, as part of her "contract" with him, she takes care of him, lives with him in the wild, and helps shield him from the intruding thoughts of the world, during which time he falls completely in love with her. Feeling he is becoming too dependent and obsessed with her and hoping he will become self-reliant, she abandons him and his Geass drives him insane.

Now Mao's one desire is to find and keep his eternally beloved C.C. (see Yandere)— to hell with anyone else, especially anyone who gets in their way. 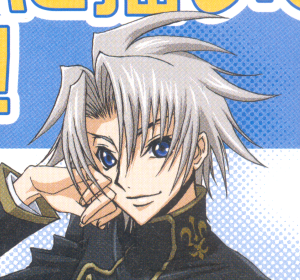 The Player Character of the Visual Novel Code Geass: Lost Colors, Rai is a mysterious young man who enters the story (approximately around Episode 8) when Milly finds him wandering around Tokyo with amnesia and takes him to Ashford Academy. He quickly learns that he has a Geass power of his own, effectively identical to Lelouch's except that Rai's is auditory rather than visual. From there, he meets the central cast, and can choose whether to become Zero's right-hand man in the Black Knights, or Suzaku's partner in the Britannian military (or, in a PSP-exclusive storyline, he can revive the Japan Liberation Front and oppose both the Black Knights and Britannia).

A member of the Geass Order who was tasked by V.V. to play the part of Lelouch's temporary younger sister after Nunnally goes missing before the events of R2. V.V. also gives her a geass, which allows her to control someone's body even if they try to resist. 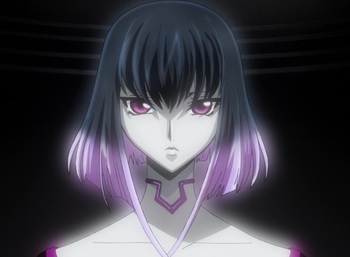 The collective consciousness of the Universe. They are a seer who watches the balance of the world from within. They do not exist for ordinary people, but exist for those who are able to see them. 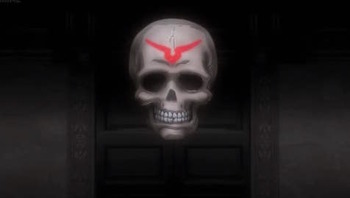 A powerful and malevolent entity that "gifted" Shin Hyuga Shaing with his Geass - for a very costly price. Its origins, or true nature for that matter, are a complete mystery.

A world-wide terrorist organization that has connections with every terrorist faction around the world. They underwent an increase of operations at the end of the Black Rebellion, and has contacts with the Middle Eastern and Chinese Federations.
Orpheus Zevon 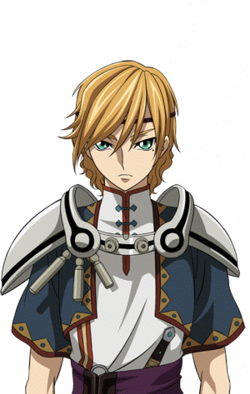 Orpheus Zevon is the twin brother of Oldrin Zevon. Born into nobility but abandoned by his parents so that Oldrin may succeed as the heir of the family according to its traditions, he was raised by a peasant family. However he was conscripted into the Geass Order against his will, using him as an assassin. Though he has long since broken ties with the Order, the cost was too great, and his lover Euliya died in the escape. When he discovered that his old family had a hand in his lover's death, he swore vengeance and returned to the battlefield. 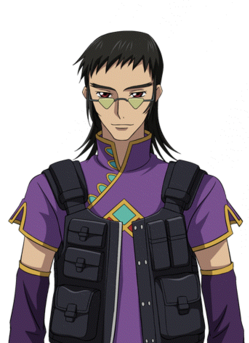 Ze Dien is a terrorist who is connected to “Peace Mark”. He is a young man originally from the Chinese Federation. He performs requests using a customized Glasgow he bought on the black market and remodeled to his preferences. He works together with Orpheus on missions along with Ganabati.

An Indian man of Sikh origin, he's an engineer and merchant who helps out in PM. He's also the designated driver for the truck that carries the KMFs used by Ze and Orpheus. 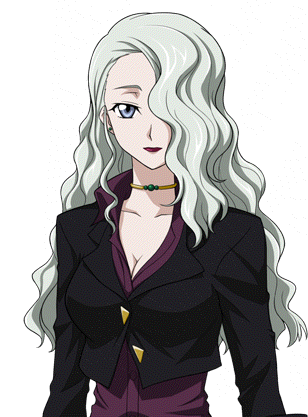 A mysterious woman who serves as PM's liaison officer with the outside world. 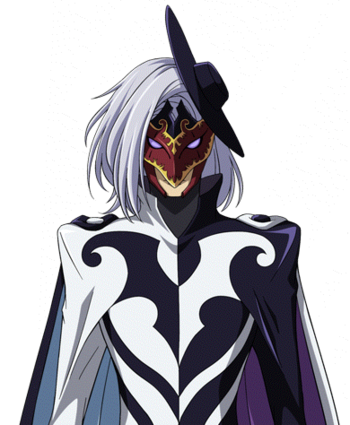 Wizard is a mysterious masked man who styles himself as a “magician”, and is a financial supporter of Peace Mark. He possesses vast information and assets, and is said to be very reliable, but his hidden background and identity have many grounds for suspicion. He toys with the two “Oz”s, Oldrin Zevon and Orpheus Zevon, whose identities and pasts he is apparently aware of. He pilots the black Knightmare Frame, Agravain.

In reality, he is Oiagros Zevon, the uncle of both Oldrin and Orpheus Zevon, and the head of the minor noble Zevon family. He is also the leader of the Britannian organization "Pluton", which has carried out dirty jobs for the Britannian Imperial Family under the direction of the Zevon family for generations. In addition, he is the one responsible for killing Orpheus' lover Euliya on orders from the Geass Order, and is the enemy that Orpheus hunts and seeks revenge against.