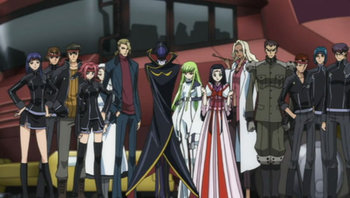 Left to right: Inoue, Yoshida, Ohgi, Kallen, Sayoko, Diethard, Zero, C.C., Kaguya, Rakshata, Tohdoh, Tamaki, Sugiyama, Minami
Zero: "The only ones who should kill are those who are prepared to be killed! Wherever oppressors abuse their power by attacking those who are powerless, we shall appear again, no matter how mighty or formidable our foe may be! Those of you with power, fear us! Those of you without it, rally behind us! We, the Black Knights, shall be the ones who stand in judgment of this world!"
Advertisement:

The character sheet for the Black Knights of Code Geass.

A mild-mannered engineer from India, Rakshata Chawla leads the research team of the Black Knights.Lloyd Asplund and Cécile Croomy. 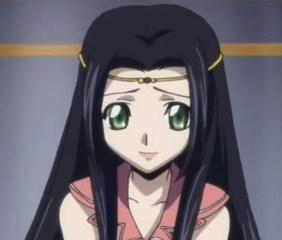 Kaguya Sumeragi (皇 神楽耶, Sumeragi Kaguya), fourteen years old (fifteen in R2), is the young head mistress of the Kyōto House and a supporter of the Black Knights. She is also a close friend of Empress Tianzi of China. Despite her age and physique, she possesses a strong will and is highly influential amongst the Houses. Kaguya has admired Zero since his debut, and wishes to have his hand in marriage. 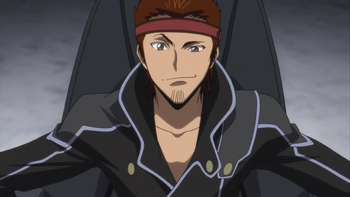 Shinichirō Tamaki (玉城 真一郎, Tamaki Shin'ichirō), twenty-four years old (twenty-five in R2), and is the leader of the second special squadron of the Black Knights. He is a hot-headed and carefree person, quick to cheer others on when not doing the fighting but rash and impulsive when he's on the front lines. His rashness is shown to border on recklessness, as he orders the execution of the Ashford Academy student council against Zero's wishes, though extenuating circumstances prevent his orders from being carried out. He pilots a standard Knightmare Frame during battles, though he rarely lasts long before being forced to eject. 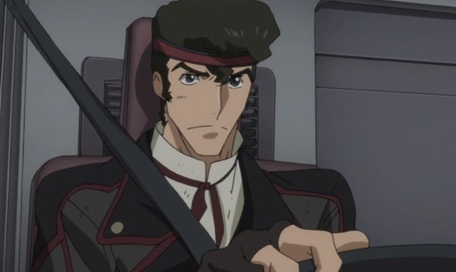 "Someone who feels hate must also feel sadness."

Twenty-six years old (twenty-seven in R2), Ohgi used to be a school teacher before he became the leader of a Japanese resistance cell, having taken over after the death of Kallen Kozuki's older brother Naoto. Or at least, Ohgi was the leader, until Zero butts in.

"Zero's arrival was like the arrival of a new age unfolding before my eyes!" 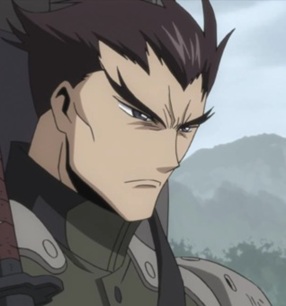 "Win or lose you must give it your all. It is the same for men and nations!"

A 37-year old colonel from the Japan Liberation Front, he is renowned as "Tohdoh of Miracles" because of his famous miracle at Itsukushima where he caused the invading Britannian army their only defeat, without the use of any knightmares. In addition to his skill at strategic planning, he's a supreme knightmare pilot. Joins the Black Knights along with the Four Holy Swords after being rescued from prison(Having been captured after the death of his superior, General Katase), becoming field commander of the Black Knights' military forces. 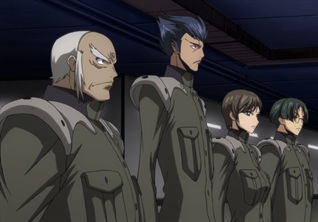 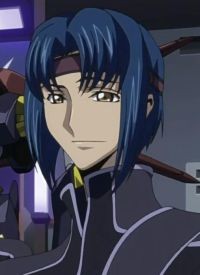 A member of Naoto Kazuki's resistance team before joining The Black Knights. He serves as a Special Division Captain.

A member of Naoto Kazuki's resistance team before joining The Black Knights. She served as a commander providing logistical support.

A member of Naoto Kazuki's resistance team before joining The Black Knights. He served as a solider under the command of Ohgi.