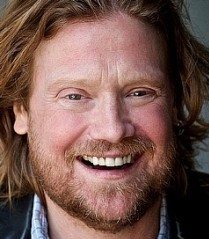 Amazing keyboard of justice in place! Amazing fingers of justice describe me!

If you needed a character to voice a guy who might have a few screws loose and is some degree of Jerkass, you were probably going to want to hire Michael Lindsay (May 9, 1963 – August 31, 2019) to voice him. His earliest notable role was that of Joe Kido from Digimon Adventure, though he'd soon start playing against this type.

He also showed up as Kankuro in Naruto, Kisuke Urahara in Bleach, and Yuu Matsuura in Marmalade Boy. In the realm of video games, he made a stint as Leon Magnus in Tales of the World: Radiant Mythology.

He formally retired from voice acting in 2012, and Doug Erholtz and Robbie Daymond took over his most prominent roles. On August 31, 2019, he passed away at the age of 56. He will never be forgotten.

"Oh, what do you know. I can't believe he actually described it..."