Characters from the Brittanian Imperial Family in Code Geass (excluding the main characters) and Code Geass: Akito the Exiled, and the tropes they embody. 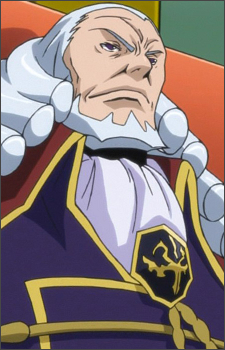 "All men are not created equal!"

Ruler of the Britannian Empire and father to Lelouch and his siblings, Charles is introduced as a Social Darwinist who thinks that war is the best way to create social progress. It's eventually revealed that his true agenda is to use the Ragnarok Connection to create "a world without lies", a desire brought about by being raised in a royal family whose members killed and deceived each other for power. Ironically, Charles' actions only perpetuate the cycle of violence and result in Lelouch's campaign to destroy the empire his family built. 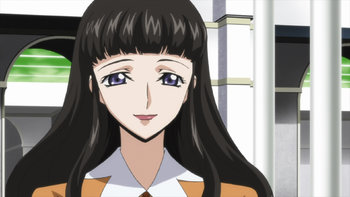 "Masks will vanish, then everyone can be exactly who they're supposed to be."

The Late Empress-Consort of Britannia, wife of Charles zi Britannia, and mother to Nunnally and Lelouch, she was first introduced as a Missing Mom killed by unknown assassins. It was due to this that caused her kids to be kicked out of the Britannian Empire, which in turn caused Lelouch to hate Britannia and begin his rebellion. To many people, she was known as Marianne the Flash, a powerful Action Mom and a nice person overall that everyone adores (providing they are not snobbish nobles). 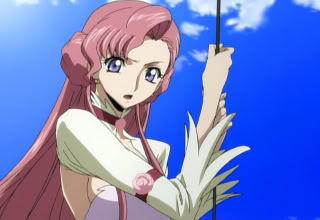 "I never want to see people unhappy ever again!"

The Third Princess of Britannia, Euphemia is a rarity among the royal family: kind-hearted, plucky, innocent and sweet. She wants everyone to be happy. Yes, that includes even the Elevens — among them, the man she loves, Suzaku Kururugi. 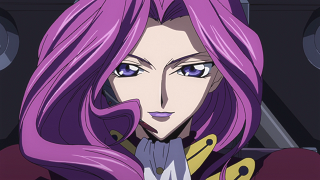 Twenty-seven-year old — twenty-eight by the second season — Second Princess of Britannia and Area 11's Governor after the death of her brother Clovis. The brilliant, courageous and widely-feared Commander-in-Chief of the Imperial Army, she is also strongwilled, xenophobic, and strict. Nevertheless, she harbors a deep and genuine soft spot for her little sister Euphemia. 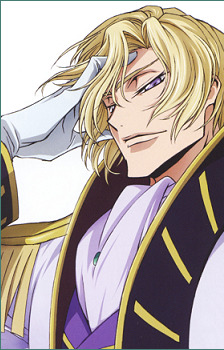 "Mankind's history is war, peace is an illusion, to turn illusion into reality is an arduous task. It requires discipline."

Second son of Emperor Charles, this blond man in his late twenties is one of the main antagonists of the series. While he comes across as an Anti-Villain due to his chivalrous demeanor, the true nature of his sinister and calculating personality is revealed when he assumes the role of Lelouch's principal nemesis in Season 2. What he lacks in typical Britannian royal theatrics, he makes up for in efficiency, cunning, and sheer ruthlessness. In Suzaku Of The Counterattack, Suzaku becomes his knight. 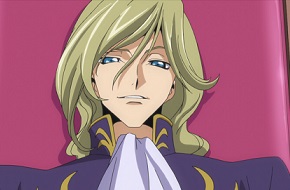 "I was just speaking to Clovis. He is at peace now. He's sitting on a beach".

Prince of Britannia and governor of Area 11 prior to the start of Code Geass. He was the first of Lelouch's relatives that he encounters (and kills) after acquiring the Geass.

First Prince of the royal family. He seems to be a rather kind man, but is utterly outclassed by the hypercompetent nature of most other royal children.

1st princess in line for the throne, and the eldest sister in the royal family. Rarely seen in the series, but carries the usual attitude of Britannians. 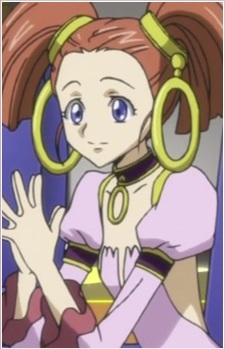 The 5th princess in line for the throne, and third oldest out of the royal siblings. A Bratty Half-Pint who carries the typical Britannian arrogance. While largely a bit character in the original anime, she plays a slightly larger role in Code Geass: Oz the Reflection.

Marrybell mel Britannia is 88th in line to the throne of the Britannian Empire, and the founder and leader of the anti-terrorism organization "Glinda Knights" within the Britannian military. She is childhood friends with Oldrin Zevon and attended military academy with her.

Marrybell's single-handed establishment of the Glinda Knights was triggered by the loss of her mother and younger sister in a terrorist attack when she was young. Although usually misunderstood as having just a lovely appearance and a gentle demeanor, she is a sharp and able person who possesses situational assessment and strategy-designing abilities and keeps others at a distance. 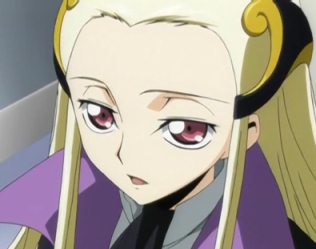 "The most splendid relationship in the world is that of loyal siblings."

V.V. (pronounced V2) is a mysterious boy with blond hair longer than his body. He has gained the power of immortality through a Geass contract like C.C. He can grant Geass contracts like her, having given both the Emperor and Rolo Lamperouge their Geass abilities, among others in the Geass Order.