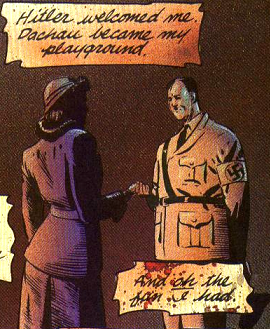 The JSA's ultimate archnemesis during World War II, Adolf Hitler's incarnation in The DCU mirrors that of our world, with a few differences. By obtaining The Spear of Destiny—the lance that pierced Christ on the cross—Hitler was able to control any metahuman who set foot in the Nazi sphere of influence, which is why the JSA was unable to take the fight directly to Germany. He also formed his own team of Nazi super-villains meant to infiltrate the Allies—Axis Amerika. As in our world, Hitler committed suicide in 1945, ending the war and freeing the JSA to enter Europe. 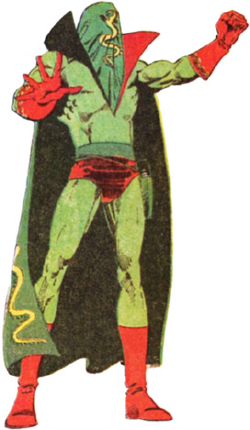 The leader of the Black Dragon Society, a World War II-era consortium of Japanese spies and saboteurs, the Dragon King worked closely with Hitler during the war and procured the mystical Holy Grail (yes, that Holy Grail) for Imperial Japan's use. After the war's end he went into hiding, only to re-emerge decades later in the U.S.A. raising his very own Daddy's Little Villain from the shadows. He has since been killed off, but his legacy survives through that daughter, the supervillainess Shiv.
Fourth Reich 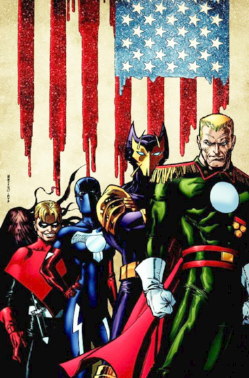 A team of Those Wacky Nazis organized by Vandal Savage to institute The Purge against the JSA's modern-day descendants. While they did succeed in killing off several potential legacies, those that did survive (such as Citizen Steel) just became more resolute and determined to follow in their heroic forebears' footsteps. Their field leader is Shazam foe Captain Nazi and their membership consists of Baron Gestapo, Baroness Blitzkrieg, Captain Murder, Captain Swastika, Count Berlin, Doctor Demon, Green Ghoul, Hunter, Rebel, Reichsmark, Shadow of War, Swastika, and White Dragon.
Karnevil 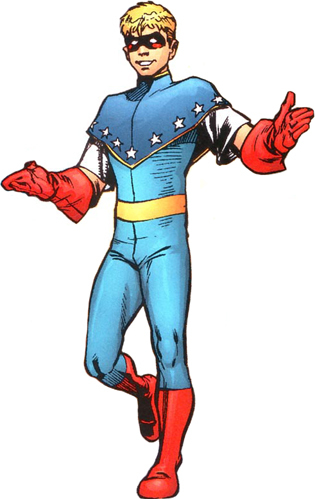 A murderous teenager recruited to mystic supervillain group the Pentacle. Following the Pentacle's defeat and disbanding, Karnevil was among the dozens of supervillains exiled to a distant prison planet during the Salvation Run event, and following his return he fell in with the Fourth Reich. This would establish him as a JSA villain, as the Reich used him as a Trojan Horse to infiltrate the JSA from within under the fictional identity of the All-American Kid. Frightfully efficient, Karnevil murdered Mr. Terrific, and his treachery helped usher in a Nazi-ruled Bad Future that was only narrowly averted.

The Injustice Society of the World 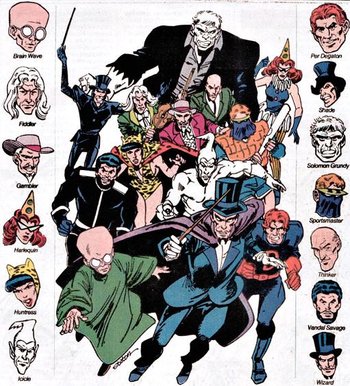 The Injustice Society is a team of villains who oppose their enemies, the Justice Society. They were originally active during the Golden Age in the 1940's, but there have been several incarnations of the team over the years. Their traditional leader is the Wizard, although they have also been lead by Johnny Sorrow. 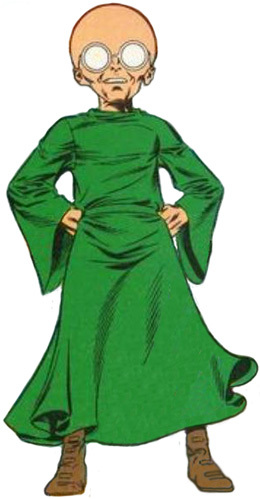 The first of two characters to use the Brainwave name, Henry King was born in the early 1910s with formidable Psychic Powers. As an adult he was a medical school graduate, but soon abandoned psychiatry in favor of a life of crime. He was a founding member of the first incarnation of the Injustice Society and a frequent foe of the JSA, but falling in love and having a child imparted on him a shred of morality. Sadly he couldn't stay on the straight and narrow and died in a botched revenge scheme, though with his last act he achieved redemption. His son, Henry King Jr., received his powers and became the second Brainwave.
Gentleman Ghost 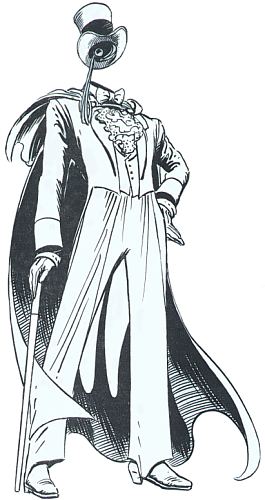 Born just prior to the Victorian Britain era, Jim Craddock was the abandoned son of a Jerkass British aristocrat, and turned to robbery to support himself. He became an immigrant to the USA, got falsely accused of a violent crime there, and was killed by a masked cowboy named Nighthawk. He became a ghost and discovered that he could only move on when his murderer moved on to the next plane of existence. Unfortunately for him, it turns out that Nighthawk is one of many incarnations of ancient Egyptian royalty, meaning that both their souls have no chance of moving on. When Nighthawk was reincarnated into Hawkman, Craddock tried to kill him without success. In response, Craddock took on the name of "Gentleman Ghost" and took to antagonizing other superheroes as a way to pass the time.
Geomancer 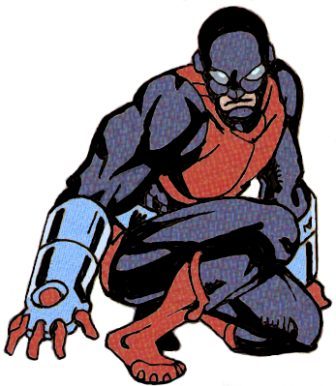 A metahuman criminal with the power of Dishing Out Dirt. He was Killed Off for Real, but a second, unnamed Geomancer emerged to take his place.

The first Geomancer was imported as a Villain of the Week for The Flash (2014), where he is played by Adam Stafford. For tropes applying to that Geomancer, see here. 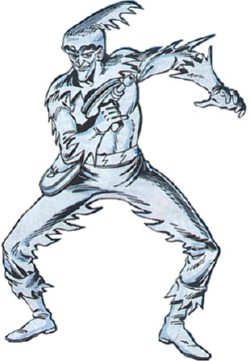 An Ice Person criminal, the first Icicle was Joar Makhent, a Mad Scientist who invented a "Cold Ray Gun" which he used to freeze his enemies. The second Icicle is his son Cameron, who was born with cryokinetic abilities and followed his father's footsteps into villainy.

Both Icicles have made adaptational appearances in Smallville and Young Justice. Joar was adapted into Superfriends, while Cameron has been adapted for Justice League: The Flashpoint Paradox and Superman/Batman: Public Enemies.
Johnny Sorrow

A silent film actor from The Roaring '20s who turned to crime after his "creepy voice" blackballed him from the new talkies, he stole a 'subspace prototype' device that allowed him to become an Intangible Man and became a professional criminal. Unfortunately for Johnny his story did not end there, as during a battle with the JSA his device was damaged and he was accidentally sent into Another Dimension, where he met an Eldritch Abomination called the King of Tears. Reshaped in that being's image, Johnny returned to his world with new powers and an insane thirst for revenge.
Per Degaton 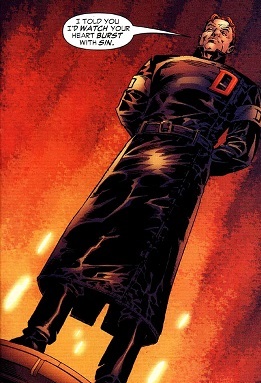 Per Degaton is time-traveling villain with a chronal duplicate created by a Timey-Wimey Ball.
Tigress 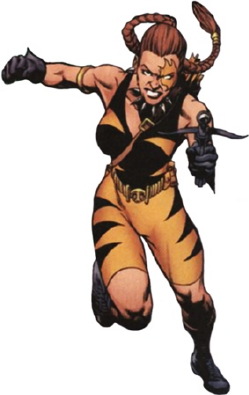 A Legacy Character if ever there was one, Artemis Crock is the daughter of two supervillains — her mother Paula Brooks was the Golden Age Tigress, while her father is the minor-league villain known as the Sportsmaster. Like her usual lover Cameron Makhent (a.k.a. the second Icicle), Tigress followed her parents' foosteps into villainy,
The Wizard

A career criminal since The Roaring '20s, William Zard worked as a minor league hood in his formative years before being arrested and serving his first prison sentence. After his release he traveled to Tibet and learned the mystic arts from a Tibetan llama. He clashed with the JSA upon his return to the States, and has remained a thorn in their side ever since.
Vandal Savage

Literally one of the JSA's oldest foes, Vandal Savage is a Cro-Magnon who was exposed to a Magic Meteor 50,000 years ago and acquired near-Complete Immortality. Living through the entirety of human history, Vandal became a master warrior, Evil Genius and conqueror extraordinaire. In the modern day he ran afoul of founding JSA member Alan Scott, the first Green Lantern, and while he has been a Rogues Gallery Transplant many times over, invariably he returns to his roots. He was responsible for The Purge that led to the establishment of the modern-day JSA, feuded with JSA powerhouse The Spectre, and has bitterly contended with his most recurring foe Alan Scott in between menacing the rest of the DC Universe.See Vandal Savage for more on him.
The Gambler 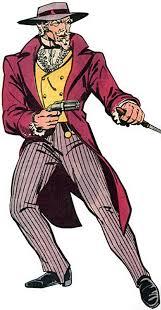 Originally a small-time thief and bank robber, Steven Sharpe decided to embark on a career as a costumed criminal after a chance encounter with the original Green Lantern, and reinvented himself as The Gambler, based on his family's history as compulsive gamblers. While having no superpowers, he instead used a wide variety of skills he learned as part of a travelling circus, such as fencing, illusions, disguises and sharpshooting.
The Thinker 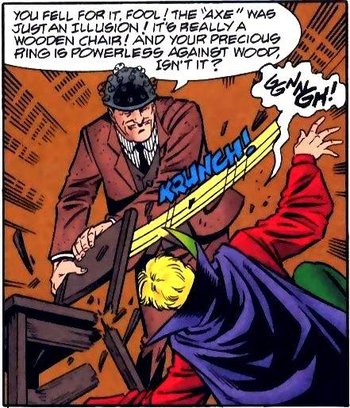 A failed lawyer who decided to turn to crime after his career flopped, using his intellect and legal expertize to become the brains behind other criminals, many of them former clients. He was the creator of the Thinking Cap, a high-tech helmet that allowed him to focus his mental energies into physical force, which would unfortunately become his downfall.
Solomon Grundy 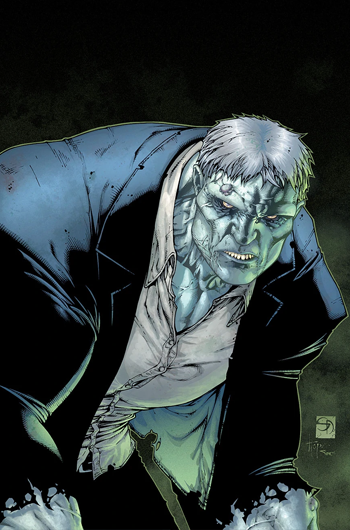 Originally written as a very generic supervillain with ill-defined powers linked to a black diamond, Eclipso's origins were definitively established in the 1992 Eclipso: The Darkness Within miniseries, which defined the villain as a vengeance demon that had only been pretending to be a pushover to lull superheroes into complacency. Later stories upped the ante by establishing Eclipso as the Evil Counterpart to JSA powerhouse The Spectre. In this new interpretation, Eclipso wasn't even just a demon but was in fact a divine being, God's first Spirit of Wrath that went rogue. Due to this interpretation tying him to the JSA's strongest member, Eclipso became increasingly affiliated with the JSA, though in recent years his Rogues Gallery Transplant nature has led him to drift off and torment other heroes.

See Eclipso for more on him.
Extant 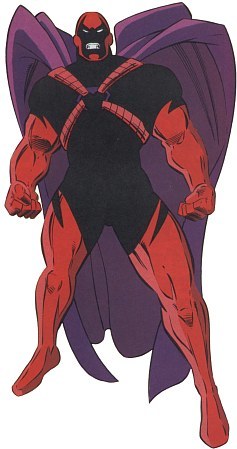 A Fallen Hero turned into one of the JSA's greatest foes, Hank Hall was once Hawk of the Hawk and Dove hero duo. Losing his brother imbalanced Hank, and while a new Dove came along, it wasn't enough to keep him grounded. Turning to supervillainy, Hall Took a Level in Badass and became Monarch, the Big Bad of Armageddon 2001. Following this story's end, Hall mutated further into Extant, a deranged avatar of chaos with high-order Time Master power.
Gog

A Cosmic Entity retconned into the first, true Gog, he is a refugee from the Third World, banished from that realm for refusing to choose sides in a great war of the gods. Falling to Earth, he spent centuries as an inert face entombed in a mountain, until a man named William Matthews unwittingly awakened him. Proclaiming himself to be a benevolent deity who only wishes to bring peace, Gog ingratiates himself to the JSA by seemingly granting all their greatest wishes, and travels across the Congo seemingly performing good works wherever he goes. Of course, this self-proclaimed savior from the stars is not what he seems...
Kobra (and his cult) 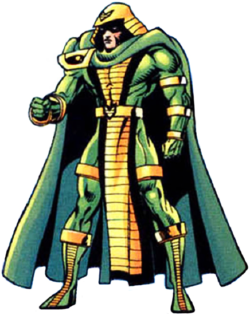 Kobra is the name of both legacy of snake-themed super-villains and the Apocalypse Cult that they lead. The first Kobra was Jeffrey Burr, a Card-Carrying Villain terrorist who was opposed by his twin brother Jason who he shares a Psychic Link with. Eventually Jeffrey killed Jason, only to be killed himself. The cult then used a Lazarus Pit to resurrect Jason and brainwash him into becoming the second Kobra.
Number 1

The nephew of Sylvester Pemberton aka the WWII-era JSA member Star-Spangled Kid, Arthur is substantially more evil than his relative. An aristocratic Jerkass, Arthur leads the Strike Force, a paramilitary band of Psycho for Hire criminals, in which he as their leader is known as Number 1.
Psycho-Pirate 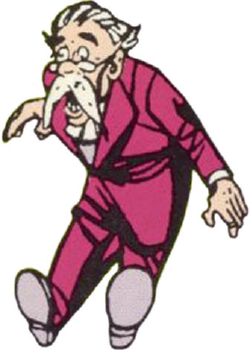 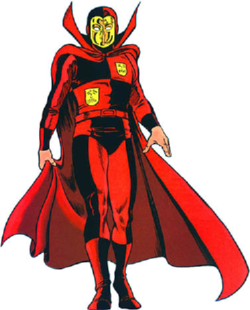 Psycho-Pirate is a legacy of super-villains with psychological themes. The original was Charles Halstead, an enemy of the JSA who committed crimes based on different emotions. His successor was Roger Hayden, who wears a Medusa Mask that can manipulate the emotions of others. This mask has arguably driven him insane over the years, and he once switched places with Animal Man ally James Highwater to escape it. Hayden was a member of the Secret Society of Super-Villains.

The second Psycho-Pirate has made adaptational appearances in Batman: The Brave and the Bold, Justice League Unlimited, the video game LEGO DC Super Villains, and a single one-shot comic created for the Young Justice series.
Ultra Humanite 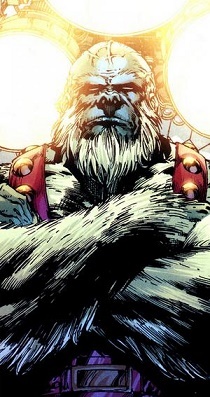 Superman's first Arch-Nemesis, before Luthor, was another bald scientist called the Ultra-Humanite. Arguably the first comic book villain with super-powers (in his case, super-intelligence), he eventually gained a gimmick where he surgically transferred his brain into other people's bodies, most notably actress Dolores Winters. Starting with The Bronze Age of Comic Books, the Ultra-Humanite has exclusively been a villain for the JSA.