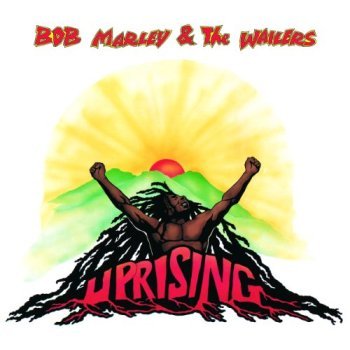 But my hand was made strong by the hand of the Almighty. We forward in this generation, triumphantly. Won't you help to sing these songs of freedom? 'Cause all I ever have: redemption songs, redemption songs
"I carried Bob Marley's 'Redemption Song' to every meeting I had with a politician, prime minister, or president. It was for me a prophetic utterance or as Bob would say 'the small axe that could fell the big tree'. The song reminded me that freedom always comes with a cost, but for those who would prepare to pay it, maybe 'emancipation from mental slavery' would be our reward."
— Bono
Advertisement:

Uprising is a 1980 album by Bob Marley & The Wailers, the 12th in their catalogue and the final studio album released while Marley as still alive. The record is most famous for the hits "Could You Be Loved?" and the standout track "Redemption Song", which was unusual in the sense that it just featured Marley alone, playing acoustic guitar and without any musical traces of Reggae.

The 2001 bonus edition adds the band version of "Redemption Song" as a bonus track and the 12-inch mix of "Could You Be Loved".