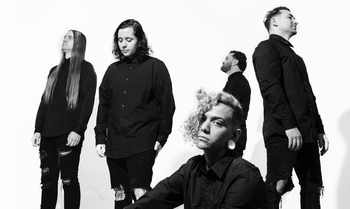 The band circa 2022. From left to right: Andrew O'Connor, Austin Archey, Will Ramos, Michael Yager, Adam De Micco.
Influences:
Lorna Shore is an American deathcore band. Once just one of many lowly MySpace bands, their tenacity, determination, and musical growth into a unique form of blackened deathcore has helped slowly but surely build them into a rapidly-growing name in the genre.
Advertisement:

Formed in Warren County, New Jersey in 2010 by Tom Barber (vocals), Aaron Brown, Jeff Moskovciak (guitars), Gary Herrera (bass), and Scott Cooper (drums) as a metalcore act, the band almost immediately put out Triumph, their debut EP. Brown left very shortly after the band formed, however, and Adam De Micco replaced him the following year. This lineup embarked on a small regional run up and down the Northeast before tracking Bone Kingdom, which came out around the beginning of 2012, though Moskovciak and Cooper left at some point during the year. The former was not replaced right away, but Austin Archey jumped in to replace the latter. The band kept on grinding throughout 2012 and 2013, and by the end of 2013, Maleficium, their third EP, had dropped and made something of a splash online. The buzz that they had gained allowed them to gain spots on multiple tours with major acts, and a decent amount of 2014 was spent on the road. Connor Deffley also wound up joining around either the end of 2014 or the beginning of 2015, rounding out the lineup for the first time since 2011. This lineup went on to track and release Psalms, their full-length debut, in June of 2015, which was hailed as a remarkably mature and well-thought-out release from a promising new band. The next year or so was devoted to touring the hell out of the album, and by the end of the year, they had already run back into the studio for their second full-length. Flesh Coffin was released in February of 2017 to excellent reviews, but Gary Herrera also announced his departure around the same time, citing general burnout. The band continued onward with a full year of touring, but a bigger shock came in April of 2018: Tom Barber had replaced Alex Koehler in Chelsea Grin and had left Lorna Shore. The band stated that they were not calling it quits, and after many rumors about the new vocalist, a still image from a new video was shown on Twitter that confirmed the rumors that CJ McCreery had joined, followed by an official announcement that spelled it out. "This Is Hell", a standalone single, was released in September of 2018 as their first work with McCreery. The band's third full-length is done as of spring 2019, and upon completion of the Flesh Coffin touring cycle, they signed a deal with Century Media Records. Immortal, their third full-length, will be released in early 2020.

As of December 23, 2019, CJ McCreery has been fired from the band following numerous accusations of serial Domestic Abuse and sexually predatory behavior. After some deliberation, the decision was made to release Immortal on its originally scheduled date, and the band has stated in unambiguous terms that they are not breaking up. Adam would later go on to state in an interview that they were in talks with an extremely strong candidate for a new vocalist. Popular rumor placed Will Ramos (ex-A Wake in Providence) as their new vocalist, and while an official announcement has still yet to be made, fans who saw them on their first post-CJ show confirmed Ramos' presence in the band. His status was unknown at the time; Ramos repeatedly stated that he was just a live session member, while the other members told individual fans that the job was his if he wanted it and that he was the guy for them as far as they were concerned. With touring off the table due to COVID-19, the band got to work on new material, and Austin also stated in a podcast that an instrumental version of Immortal was coming in the near future (which did come out the following year), while an Updated Re-release with new vocal tracks is also being worked on.

After over a year of ambiguity regarding his final status in the band, Will Ramos was confirmed as their new vocalist in June of 2021. The EP ...And I Return to Nothingness, the band's first release with Ramos, was released in August to unanimous critical acclaim; the lead single "To the Hellfire" gave the band their commercial breakthrough, topping Apple Music's metal charts. The EP was featured in numerous end-of-year "best metal releases" charts, with "To the Hellfire" even being crowned by Loudwire as their best metal song of the year.

In 2022, the band announced that they have finished recording Pain Remains, their fourth album, which will be released in October. The lead single, "Sun//Eater", was released on May 13 after being previewed during their live shows.