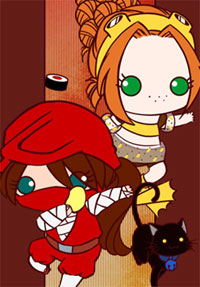 We're random, and we love it!

is a silly and random webcomic about the lives of Chop Chop Ninja Doom and Chocobanana Sofuto, their pets and friends. Half Gag Per Day, half Slice of Life, the comic is presented in groups of 4-Yon Koma miniature story-arcs.

Originally created by the joint efforts of Shouri and Sally B, now it's run exclusively by Shouri.

Not to be confused with Spinnerette.