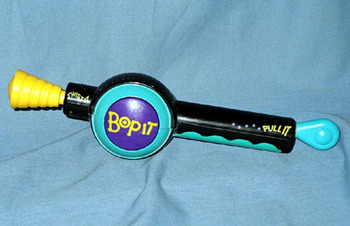 Bop It! Twist It! Pull It!
Bop It is a series of handheld electronic games marketed by Hasbro. It was designed and patented by Dan Klitsner in 1996, with the first game being released in the same year. It would later give way to many Spin-Off versions of the game such as Bop It Extreme, Bop It Extreme 2, and Bop It Download. It also spawned an Effective Knockoff known as Click-It (which gave way to another one called Super Click-It).
Advertisement:

The games themselves are focused on hand-eye coordination and commands. When the game commands a player to do an action on the game, the player has to obey. If successful, a sound effect plays and the player earns a point. If unsuccessful, the game ends.