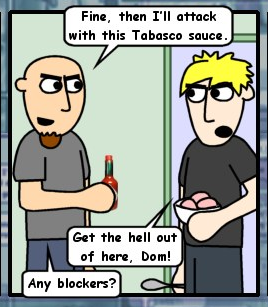 UG Madness is a Magic: The Gathering webcomic that started in May of 2004. It stars two roommates and avid Magic players, Tyler and Dominic. The comic usually uses the Two Gamers on a Couch format, but has branched out many times into other formats; the author has shown a taste for experimentation with comic styles. Much of the comic's humor comes from poking fun at the Magic community, especially the Unpleasable Fanbase, although there is plenty of character humor as well. The title of the webcomic is actually pronounced "Blue Green Madness", as U and G are oftentimes used by Magic players to refer to the game colors of blue and green respectively. The term "UG Madness" refers to a popular deck archetype from the game's Odyssey block.

UG Madness (the webcomic, not the deck) has actually been recognized by Magic: The Gathering R&D director and writer Mark Rosewater (who also happens to be a recurring character in the comic).