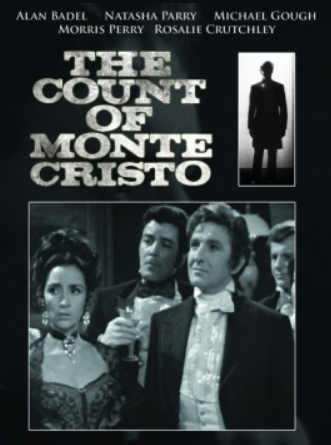 The Count of Monte Cristo is a 12-part 1964 BBC miniseries based on Alexandre Dumas' classic novel of the same name. It stars Alan Badel in the title role.

Edmond Dantes is a naive and amiable young sailor enjoying an upturn in his fortunes. He has just been promoted to captain, and is set to marry his pretty fiancee Mercedes. However, his successes arouse the jealousy of others, principally his love rival Fernand (Philip Madoc) and shipping clerk Danglars (Morris Perry), who anonymously denounce him as a spy for Napoléon Bonaparte. Edmond is arrested and brought before a prosecutor, Villefort (Michael Gough), who realises Dantes is innocent but for self-serving reasons still orders him incarcerated in the Hellhole Prison Chateau d'If.

While in prison, Dantes befriends an elderly inmate named Abbe Faria, an educated man who makes Dantes his pupil and helps him discover the truth of his imprisonment. Before dying, Faria also tells Dantes of a vast treasure hidden on the island of Monte Cristo. Dantes finally escapes, finds the treasure, and transforms himself into the mysterious and fabulously wealthy Count of Monte Cristo. Finding that his betrayers have all prospered in his absence, the Count sets about exacting a cruel and painful revenge on them.

Tropes in this version of the story include: