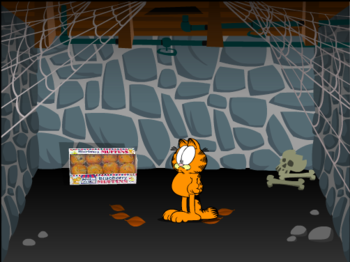 Guess what lured Garfield into the Creepy Basement.
Advertisement:

Garfield's Scary Scavenger Hunt is a series of two online games previously found on Garfield's official website (now defunct) that involve the player controlling Garfield to find sugary sweet snacks (all of them being pastry) in a haunted mansion filled with monsters. There is no time limit, but Garfield does have a maximum of how many times he can be scared before he runs off and quits the game.

SPOILERS BELOW! Read at your own risk if you haven't played (and completed) the games yet.