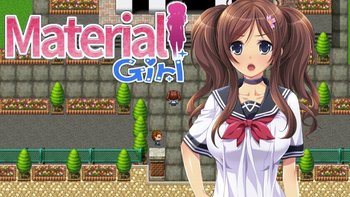 Will you choose money or purity?
Advertisement:

Material Girl is an H-Game developed by Dieselmine, and published by Sakura Game. It was released internationally on June 20, 2017, but in February 2022, an agreement was made to stop the distribution of the game on Steam. It is not to be confused with a song by Madonna, a British romantic comedy set in the fashion world, or a webcomic about a girl's clothes forcing themselves upon her brother.

Sakura is a born beauty, having many fans at her school despite being unskilled at social contact. One of the main concerns that constantly bothers her is her financial situation; her family is poor, and gave her a pitiful allowance growing up, causing her to dream of becoming rich ever since she was a child. One day, Sakura's parents are called away for business, and it doesn't seem like they'll be back any time soon, leaving Sakura alone and without nearly enough money to pay for the upcoming bills. Thus, Sakura decides to balance her school life with a couple of part-time jobs...and quickly finds out that Sex Sells.

This game uses the following Tropes: