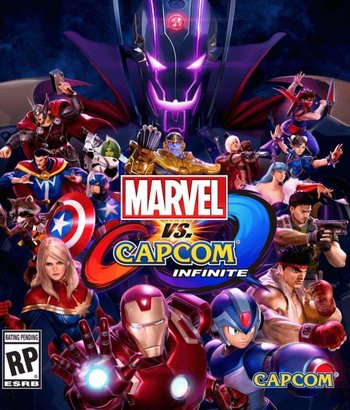 The Infinity War begins!
"Heroes of both dimensions... Welcome to ours!"
— Ultron-Sigma
Advertisement:

The game features 2-on-2 gameplay in the vein of the pre-Marvel vs. Capcom 2 entries. It also implements the Infinity Stones as an in-game mechanic, marking a return to the days of Marvel Super Heroes, and uses a six-button layout similar to that of MvC2 (Light Punch, Light Kick, Heavy Punch, and Heavy Kick, with Assist 1 and Assist 2 replaced by Tag and Infinity Stone). A dedicated Story Mode switches between the game's various characters—on both sides—as a cinematic narrative unfolds, ultimately leading up to a brand new final villain.

The game was released on PlayStation 4, Xbox One, and Steam on September 19, 2017, making it the first game in the series to be developed with a PC release in mind (not counting Ultimate Marvel vs. Capcom 3, which was initially console-exclusive before being ported to PC).

A demo of the game's story mode was released on Monday, June 12, 2017, to coincide with the first day of the E3 conference. To help promote the game, all of the Marvel Comics series with issues set for release in August had a Marvel vs. Capcom-themed variant cover.

Synopsis: Sigma and Ultron meet and decide that the only way to rid both of their worlds of organic life is to merge said worlds, and themselves, using the Reality and Space stones. 88 days after the convergence, Captain America and X gather their respective fighters and set off on a deadly mission, liberate Thanos and use his help to recover the remaining four stones and use them to stop Ultron Sigma for good. Of course, Thanos has his own plans, as does Jedah, and several others...