Literature / The Emerald City of Oz 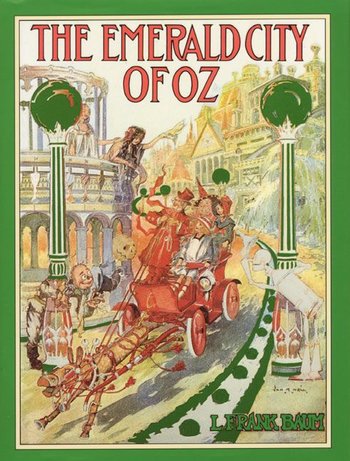 Most DEFINITELY the last book of the series...note  Book 6 of The Famous Forty Oz books!
Advertisement:

The Emerald City of Oz is the sixth book in L. Frank Baum's Land of Oz book series, published in 1910. It was illustrated by John R. Neill. Baum, tired of writing the Oz series and wanting to move on to other works, intended it to be the last Oz book; instead it is more of a Series Fauxnale, as Baum would be forced to write the seventh Oz book, The Patchwork Girl of Oz, just three years later due to financial hardship.

The Nome King, Roquat the Red, plans to dig a tunnel under the Deadly Desert into the Land of Oz where he will take back his Magic Belt from Princess Ozma, destroy Oz and enslave its people. General Guph then tours the neighboring lands rounding up allies, including the comical Whimsies, the strong and brutal Growleywogs, and the powerfully magical Phanfasms in preparation for the invasion. Princess Ozma eventually discovers the plan using the Magic Picture, but pledges pacifism and resolves not to meet the invasion with force.

Meanwhile, Dorothy Gale's family is in dire financial straits; having to rebuild their home after the tornado in the first book, coupled with years of droughts, have put Uncle Henry in so much debt that their farm is going to be foreclosed on. Dorothy makes a desperate plea to Princess Ozma to allow herself, her aunt and her uncle to live in Oz permanently, to which Ozma readily agrees. Dorothy's aunt and uncle are amazed to learn Oz was real all this time, and while they need some time to adjust to being transported to a magical land, they are all too happy to live in Oz. They then tour the southern Quadling Country of Oz in Ozma's Red Wagon and meet various intriguing people like Miss Cuttenclip, the Fuddles, and the worrisome Flutterbudgets. Dorothy also becomes lost one morning and visits Utensia, Bunbury, and Bunnybury before the Wizard finds her again. However, when they visit the Tin Woodsman, they learn about the impending invasion of Oz, and race back to the Emerald City to meet their fate.