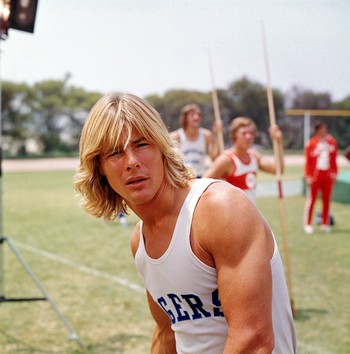 A Nanu kind of athlete.
The World's Greatest Athlete is a 1973 live-action Disney film about two college coaches, Sam Archer (John Amos) and his assistant Milo Jackson (Tim Conway). A series of coincidences sends the pair to Africa, where they catch sight of the Tarzan-like Nanu (Jan-Michael Vincent), a man who can outrun a cheetah in full bound.
Advertisement:

Seeing this, the men quickly attempt to recruit the young man for their college team, but are confronted by Nanu's godfather, Gazenga (Roscoe Lee Browne). Gazenga believes that allowing Nanu into the world of competitive United States college athletics might be too much for the young and impressionable man. Disappointed but persistent, Sam and Milo learn that among Nanu and Gazenga's people, when one man saves the life of another, he has to become that man's protectorate for the rest of their lives and must follow the man he saved wherever he goes. After a few failed attempts, Sam and Milo are able to trick Nanu into saving him, from a stomachache. With the deed done, all three men (plus one stowed away tiger) get on a plane and head back to the U.S.

Nanu then discovers how much he genuinely enjoys the sports Sam has him train in and tries to make history by winning every event at the NCAA Track & Field Championship.