Western Animation / Hare-Way to the Stars 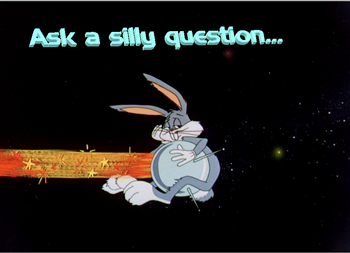 Watch out for flying satellites!
Advertisement:

"Hare-Way to the Stars" is a 1958 Looney Tunes cartoon directed by Chuck Jones and starring Bugs Bunny and (not yet named) Marvin the Martian. It has a similar to premise to "Haredevil Hare", which was released ten years earlier.

One morning, after waking up from a bender (having mixed carrot juice with radish juice), Bugs Bunny prepares for a morning dip in the lake. Unbeknownst to him, however, a missile launchpad had been setup directly over his burrow, and in his daze, inadvertently climbs into it just before it blasts off. Upon reaching the other end, Bugs only has a moment to realize he is in space before a passing satellite carries him off, resulting in him crash-landing on a strange world consisting of Floating Platforms. There, he meets a local, Marvin, who, after 2,000 years of work, finally completed his Illidium Q-36 Explosive Space Modulator (which resembles a stick of dynamite) enabling him to fulfill his dream of seeing Venus unobstructed by blowing up the Earth. In the midst of asking for a Flying Saucer to get home, Bugs realizes what intentions the creature has for his planet and swipes the Space Modulator when he isn't looking. Unfortunately, Marvin responds by dispatching a band of Instant Martians after him. Bugs eventually manages to evade the Martians, get a flying saucer, and leaves Marvin's Space Modulator to blow up in his face while taking his supply of Instant Martians. Unfortunately, upon returning to Earth, Bugs has a crash-landing that inadvertently causes an Alien Invasion.

"Hare-Way to the Stars" provides examples of:

"Run For the Hills, Folks!"

After getting back to Earth, Bugs accidentally falls into the sewer with Marvin's jar of Instant Martians. After leaping out, he advises the audience to run for it, while the Martians begin emerging from underneath.

"Run For the Hills, Folks!"

After getting back to Earth, Bugs accidentally falls into the sewer with Marvin's jar of Instant Martians. After leaping out, he advises the audience to run for it, while the Martians begin emerging from underneath.