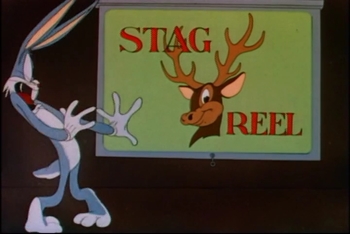 What's Cookin, Doc? is a 1944 Looney Tunes cartoon, directed by Bob Clampett and starring Bugs Bunny. It is centered on a cocksure Bugs Bunny attending an Academy Award ceremony, believing he'll be the winner. When he loses to actor James Cagney, he attempts to win over the audience by showing them one of his cartoons.

Strangely, this cartoon is on the list of 12 Bugs Bunny cartoons that have been banned by Cartoon Network for having discriminatory caricatures. Outside of the clips from "Hiawatha's Rabbit Hunt", the implied sex joke in the "Stag Reel" gag, and the Camp Gay way the phony Oscar acts at the end, there's nothing really offensive about this short. It also doesn't help that Cartoon Network actually aired this on The Bob Clampett Show a year after they pulled this from their 2001 June Bugs, which was supposed to have every Bugs Bunny cartoon ever made. It has also aired on their other anthology shows Bugs and Daffy note not to be confused with the Kids' WB! version and The Looney Tunes Show note the 2001 anthology series, not the 2011 series of the same name.