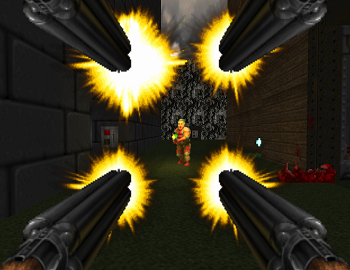 In Soviet Russia, gun fires YOU!!
"There is no end to the overkill; as long as the world expands, there is still room for flames."
—The One, Who Seeks Pride
Advertisement:

Russian Overkill is an absurdly over-the-top gameplay mod for Doom created by ZDoom forum user PillowBlaster, heading a modding team comprising several members (PillowBlaster included) who would subsequently make the other equally over-the-top and highly acclaimed Doom gameplay mods Guncaster and Trailblazer. This mod replaces the standard weapon and item spawns with an impressive variety of Purposely Overpowered weapons and items that will tear through, or help you to tear through, any monsters you face like tissue paper, while at the same time supplementing Doom's UI text elements with a vodka-infused overdose of Glorious Mother Russia.

Rather unusually for a Doom mod, Russian Overkill features three playable classes, each with their own unique characteristics, special skills, and starting weapon:

Besides the playable characters and replacement of weapons and items, Russian Overkill also removes the health cap and replaces armor with shields, which also has no cap and protects the player from all incoming damage until fully depleted.

Although Russian Overkill was considered finished in 2013, the mod remains in semi-active development, with each new update bringing it up to date with the latest ZDoom release at the time, and generally making the mod as a whole feel smoother. As of version 3.0, Russian Overkill also includes the following two components that were initially released as separate add-ons for the mod:

While primarily designed to be run in ZDoom or any variant of it, on top of a Doom IWAD, Russian Overkill also features basic compatibility with Heretic IWADs.

Russian Overkill can be downloaded here