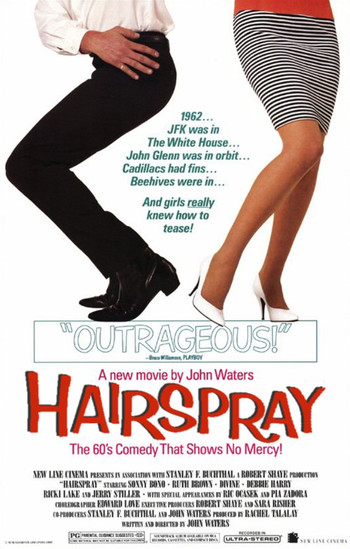 It's Baltimore in 1962, and Tracy Turnblad is a huge fan of The Corny Collins Show, which is similar to American Bandstand. She also is a fan of big hairstyles which require hairspray to stay in place — a trend the adults disapprove of. When one of the old star dancers has to leave because of pregnancy, an audition is held for a new female dancer, and Tracy gets the spot because of her talent and her exuberant personality. This leads to a chain of events that will change Baltimore forever...

This was the first film John Waters made with a PG rating. It was released in 1988 and starred Ricki Lake as Tracy Turnblad, Divine as her mother, Edna, Jerry Stiller as her father, Wilbur, and John Waters's usual repertory cast.

The film eventually inspired a 2002 Broadway musical, which in turn was made into a film in 2007. It starred Nikki Blonsky as Tracy Turnblad and John Travolta as Edna, among an all-star ensemble cast. NBC aired a live performance in December 2016.