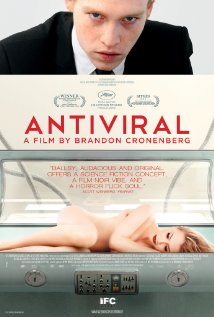 Take another little piece of my heart, now baby...
Advertisement:

In an Alternate Universe set in the present, celebrity worship has reached its logical end: clinics now harvest diseases from the famous, dilute their infectiousness, and sell them to their fans. The success of the Lucas clinic hinges on their exclusive contract with starlet Hannah Geist (Sarah Gadon) - who is also the object of obsession of Lucas sales rep Syd March (Caleb Landry Jones). Unknown to anyone else, March has not only been shooting himself up with celebrity germs on the sly, he's also been sneaking said germs out of the lab and passing them on to bootleggers. His scheme begins to unravel when, after illicitly sampling Hannah's latest disease, March suffers an extreme, hallucination-fueled reaction, and finds himself the pawn of rival clinic owners and back-alley genetic scientists.