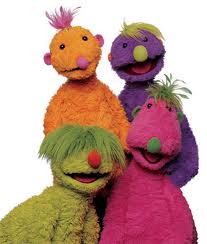 The Hoobs was a British-Canadian children's television show produced by The Jim Henson Company, originally airing on Channel 4 and Nick Jr. UK from 2001-2002. In the United States, the show was available exclusively on Hulu, though has since moved to a service called TubiTV. It also once aired on Sprout and if you have Roku, you can watch the complete series for free through a channel called Henson Family TV. The eponymous Hoobs were a species of alien creature reigning from the fictional Hoobland (in reality these creatures were played by muppets), sent down to Earth by their mentor Hubba Hubba to gather as much information about Earth as possible. Three of these Hoobs — Iver, Tula and Groove — were handed a Hoobmobile that ran on singing motors (yes, really) while they travelled the UK. The fourth, Roma, was sent to other parts of the world, like Oceania, Europe and even Antarctica to report on her findings which the other Hoobs would watch on a large screen.

The show intended to teach children about the very basics of human science and scientific research, as evidenced by the basic plot of every episode: