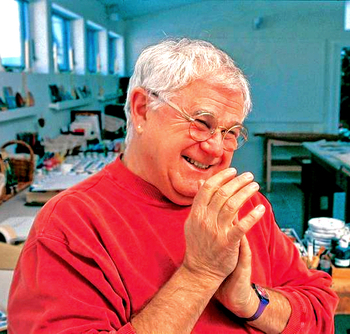 "Reading is important, because if you can read, you can learn anything about everything and everything about anything."
"A picture book is a small door to the enormous world of the visual arts, and they're often the first art a young person sees."
Advertisement:

From the age of four, Tomie knew that he wanted to be an artist, and also fantasized about being a professional tap dancer or singer. He credited his family with encouraging his development as an artist, and influencing the themes of many of his works.

dePaola studied art at New York City's Pratt Institute, and would receive honorary degrees from various colleges across the country, as well as teaching art at several more. He retired from teaching in 1978 to focus on his illustrating and writing career. He frequently collaborated with other authors (with his first illustration credit being for Lisa Miller's Sound, in 1965), but is best remembered for the works that he authored himself, ranging from childhood anecdotes to re-tellings of folktales and legends — among all of them, he is most famous as the creator of the beloved Southern Italian traditional healer/wise woman, Strega Nona. For his contributions to children's literature, he won several awards, including the Caldecott Honor (for the first Strega Nona story), the Newbery Honor (for 26 Fairmount Avenue), and the Children's Literature Legacy Award, as well as being named a Living Treasure by the State of New Hampshire.

In 2001, Tomie hosted a short-lived television series, Telling Stories with Tomie dePaola, produced by the Jim Henson Company, and airing on Hallmark Channel. The series is available for streaming on the Roku Channel

Tomie was of Irish descent on his mother's side of the family, and Italian (Calabrian, to be exact) on his father's; many of his stories — such as those of Strega Nona, Old Befana, and Jamie O'Rourke — reflect his heritage. A native of New England, he was born and raised in Meriden, Connecticut, and lived in New London, New Hampshire for most of his life. This was reflected in his anthology of New England tall tales, Tomie dePaola's Front Porch Tales and North Country Whoppers.

In the last weeks of March 2020, Tomie fell in his studio and sustained a serious head injury, ultimately succumbing to complications from corrective surgery.

Selected Bibiography (both written and illustrated by Tomie unless otherwise noted)

Tropes related to Tomie dePaola and his work include: