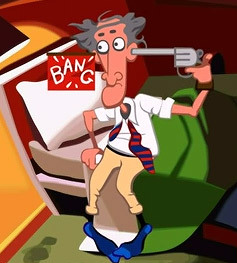 Not recommended for the Driven to Suicide.
The Joker: All right, Batman, you either hand over the bag, or this pony will get a bullet to the head! (points gun at Apple Bloom)
Batman: What do you mean, "bullet"? Do you mean that thing that once you pull the trigger it says "bang"? That stuff's getting old, man!
The Joker: (laughs) You think this is one of my toy guns? (fires warning shot) Now hand over the bag or else she gets it!
— The Joker Meets My Little Pony
Advertisement:

A notorious joke weapon responsible for the failure of countless suicide attempts, suicide pranks, mugs and murders. When the trigger is pulled, the gun barrel emits a large flag saying "BANG!"

If the person holding the gun assumed the gun was real, expect an Oh, Crap! moment. Thus this weapon often works for stick-ups.

The title is a take on BFG. Compare Only a Lighter.

The reaction from V says it all

The reaction from V says it all