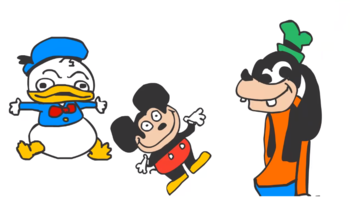 Mokey: "OH BOY!!" Grooby: "AHYOG!" Dilan: "Unintelligible Gibberish"
Mokey's Show is a webseries created by Sr. Pelo which parodies Mickey Mouse. All of the videos are nonsensical in nature. The videos follow our titular hero along with his friends Dilan and Grooby, his girlfriend Momi (pronounced "Moh-mee"), and his archenemy Put (pronounced "Poot") as they do things like celebrating Christmas, going to the beach, and smoking weed. Usually while being really loud while still managing to be entertaining. All of the episodes can be found right here.

Mokey turns a kid into a turkey and serves him to a family for Christmas dinner.

Mokey turns a kid into a turkey and serves him to a family for Christmas dinner.