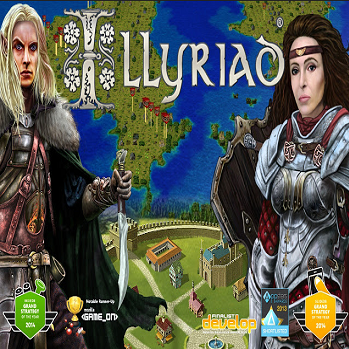 There was a time of myths and creation, a time when gods walked the earth and their disciples served them eagerly. This time was known as the First Age. That time has passed, unfortunately, but the ones who worship these gods remain. Four races, each claiming themselves as the favored children of creation, have done battle with each other since time immemorial. The domineering and highly adaptable humans, the stubborn and defense-minded dwarves, the lithe and mystical elves, and the bloodthirsty, yet surprisingly cooperative, orcs. Even now, tensions are high all across the continent, from sources such as racial conflict, Machiavellian schemers, radical factions, dragons, giant spiders, hordes of the living dead, and extremely ineffectual nobles. And you're plopped down into the crossfire.

Welcome to Illyria, a browser-based MMO/Real-Time Strategy game hybrid. Its alpha was first launched in 2010, with it being upgraded to full game the following year. The game keeps on going as of 2019.