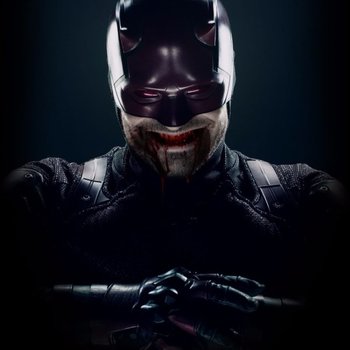 "You know you're one bad day away from being me..."
Daredevil: You took their eyes!
Madame Gao: No. They blinded themselves.
—"The Ones We Leave Behind"
Advertisement:

When they said that Daredevil on Netflix was going to be Darker and Edgier than the rest of the Marvel Cinematic Universe, they weren't kidding.

Episode 1 - Into the Ring
Episode 2 - Cut Man
Episode 3 - Rabbit in a Snow Storm
Episode 4 - In the Blood
Advertisement:
Episode 5 - World on Fire
Episode 6 - Condemned
Episode 7 - Stick
Episode 8 - Shadows in the Glass
Episode 9 - Speak of the Devil
Episode 10 - Nelson v. Murdock
Episode 12 - The Ones We Leave Behind
Episode 13 - Daredevil