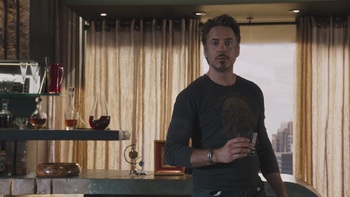 Tony is way ahead of us.
Being a universe started by Tony "Demon in a Bottle" Stark himself, you know the Marvel Cinematic Universe makes for substantial drinking.
Advertisement:

Be wary though. Not all of us have Steve Rogers’ superhuman metabolism...

For an extra challenge, start from Iron Man and make it through all the Marvel Studios entries of the MCU. You'll probably be dead by then.

open/close all folders
General Drinking Game that applies to all entrires
Advertisement:

Loki could use this game...